1.76 MHz is an abnormality that doesn't have a visible shape or form besides an odd static in the containment room. It's actually a radio wave which can be picked up in the zone of the containment.

1.76 MHz's ability is triggered when its containment chambers

Qliphoth Counter reaches 0. Its counter can fluctuate by the next methods:

Fortitude gain no bonus from working on the abnormality.

Qliphoth Counter reaches 0, the ability triggеrs. It consists of distorting the view of hallways and small rooms across the facility, similar to its own distortion. It starts in a nearby hallway and spreads to a nearby hallway or small room counterclockwise from the center of the department. It takes intervals to spread and - once one department is complete - will spread to the next one (and so on). The affected zones will deal a minor 4

White Damage every 3 seconds to any employee located in them.

Once 1.76 MHz begins distorting rooms, the only way to make it stop is by making its

Qliphoth Counter reach its maximum amount again. Once the counter is at 4, all the other affected zones will disappear immediately.

1.76 MHz was first described as phenomenon occurring in a certain location where the employees began to suffer symptoms of specific hallucinations and hostility. Later, a radio frequency was discovered at 1.76 MHz , which at changing intervals , played different sounds: pleas of help, explosions, screams and finally - silence. At the end of the broadcast, smoke came out of the radio itself, even though it wasn't damaged at all. Several minutes after the broadcast, the employees in containment became aggressive and tried to attack others.

After the events, the affected employees declined counseling and couldn't be forced to since - oddly - nobody got hurt. In the containment room, noise and hallucinations became more frequent.

It is speculated that the Abnormality attempts to make people remember a specific day in its area of effect; likely one day of a battle or war.

Is unknown when the experiment or events took place.

1.76MHz responds to the four works in order of best to worst:

Good. Generating 0-5 PE Boxes in the work will cause it to feel

Distressed, generating 6-9 will cause it to feel

Information if the Abnormality can escape or not: "Non Escaped Abnormality", plus its

Qliphoth Counter (4). Even when the Abnormality itself doesn't have a fixed form or actual way to consider itself 'tangible', it can spread outside of its containment room.

"This Abnormality is a phenomenon with no visible form. It was discovered when employees began to exhibit shared symptoms when entering a specific area of the facility. They all suffered hallucinations of a specific nature, and their mental corruption increased."

"After setting a radio’s frequency to 1.76 MHz, we waited. Following 12 minutes, a mysterious voice was heard through static. It was difficult to make out what it was saying, but it appeared to be in distress and was asking for help."

"17 minutes in, the voice stopped and 3 loud explosions were heard, which were then followed by 2 smaller explosions. It can be assumed that the situation the voice was in was chaotic, as based on the various levels of screaming that could be heard.

23 minutes in, all was silent.

Once 25 minutes passed, the radio began to emit smoke. We thought the machine had fried, but no fault could be found.

Continuing past 30 minutes, everyone in the area was suddenly filled with rage and started to exhibit the desire to assault one another with extreme aggression."

"Following the incident, all employees who took part refused to seek counseling (we couldn’t make it mandatory as no one was injured). It is still unknown what caused the collective rage."

"Afterwards, unknown noises and hallucinations started to occur near the Containment Unit. This is a recording of the day we must never forget. It brings us to a chaotic place—forgotten by many—that must never be forgotten."

"Approximately half of the dispatched employees experienced mental disorders, collective anger and showed aggressive behavior toward anyone in close proximity after the encounter with the Abnormality." 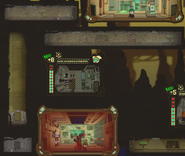 1.76 MHz ability under effect, affecting 2 hallways and a small room