"Bearing the hope to return to dust, it shall go back to the grave with all that desires to live."
- Alriune's Entry

Alriune (T-04-53) is an Abnormality that is tall, pink, and looks similar to a horse. She has 6 pointed legs, an armless human-like upper body covered in bright teal leaves, and a head with empty, flower-filled eye sockets and pink flowers coming out of her mouth. She is also wearing a pink oversized wide brim hat with a teal leaf at 1 side and pink flowers dangling across the brim. Pink petals are falling around her.

Her ability will trigger when her

Qliphoth Counter reaches 0. Her counter has a high chance of decreasing when getting a

Bad Work result. Alriune will escape when her counter reaches 0, having 1000

HP and teleporting by using a pink flower-like curtain while she breaches. She prefers to confine herself to hallways and stay out of the main departments while breaching.

When an employee is in the same room as her, petals will start to show up above her after some time, with a maximum of 3 petals. When the 3 petals are visible, Alriune will deal high (50~70)

White Damage to any employees in the same room and soon after, teleport to another location. If the employee runs out of

SP, as a result of this effect, instead of going into a panic state, they will be covered by a pink curtain like Alriune and when the curtain disappears, they will be covered in petals and leaves and be considered dead. She will repeat this until subdued or the day ends. She'll teleport to another hallway after a long period of time has passed without any other employees or targets in the same room.

Alriune is a doll who yearned to be human. While loved by many people for her soulful eyes, time passed and she was abandoned in a dark forest where the crows stole them from her. As more time went by, being abandoned caused her mind, heart, and life to start to fade away. She started to turn to dust.

Alriune seems to repeat a cycle of life, similar to 'dust you are and to dust you shall return'. This concept seem to be mentioned in her encyclopedia entries, and in the case that she has to 'return to dust', she will bring everyone else to her own fate.

Where Alriune was found and how she arrived in the facility is still unknown.

Alriune responds to the four works in order of best to worst:

Good. Completing 0-7 E Boxes will cause her to feel

Distressed, completing 8-15 will cause her to feel

E-Boxes (22) and their emotional state and its

Qliphoth counter (1). This include her defenses when breaching:

"An Abnormality that knows of spring’s genesis and autumn’s passing."

"Its surface is smooth as if it were ceramic. In the place where the Abnormality’s eyes should be, it is empty. The cracks and openings are instead filled with growing plants."

"Alriune, a lovely one; a doll yearned to be human. It was adored by people, its pupils soulful."
"Alriune, abandoned in a dark forest; its eyes stolen by crows lusting for glitter. Its mind, life, and heart slowly withered away."
"Alriune, lacking eyes but all-seeing; a human yearned to be a doll. Bearing the hope to return to dust, it shall go back to the grave with all that desires to live." 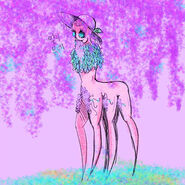 Alriune's Artwork
Notice About the Article "Alriune":
Are you looking for the old version of this page: Alriune (Legacy)
"Alriune" is using information from the Newest version of the game (v0.1). The information here is from a newer version of the game including the most recent gameplay changes.
Community content is available under CC-BY-SA unless otherwise noted.
Advertisement