This section contains spoilers related to the story of Lobotomy Corporation.
Read ahead with caution if you want to experience the story for yourself.

Angela is an abnormally advanced Artificial Intelligence in the form of a text based Natural Language Processing and response program, as well as a surveillance system for the facility, although it is said by B that it is more. The program is a longstanding secretary of sorts at Lobotomy Corporation, and while restricted from making any actual decisions itself, Angela is capable of alerting the administrator of any potential problems, or any problems in general thanks to its "many eyes". It is more accurate than any human in its job, having caused many humans before it to be replaced.

Angela is the only character in the gameplay to have the same overlooking safety as X, as mentioned during the Plague Doctor's Transformation.

Angela was built by A and other workers of Lobotomy Corporation, to become an ideal assistant or 'partner' for the new managers of the facility X-394, of the corporation. The project became so successful that it had more authority than other employees of the corporation, like being able to select which person will be the next new manager and give authorization to certain employees to do specific tasks (Mentioned in Nameless Fetus' Quote and final entry). Angela is still serving to the company through several operations, mostly, informing to the managers about the success of the corporation, any recent events in the facility and encouraging them to stay with the company. Its 'loyalty' to the company also is a warning to the managers, because it will try to keep all the information in secret and managers don't have to share this with 'outsiders'.

Angela is a dependable and logical assistant who is with you until the last employee. It lacks emotions due to the fact that it is only an AI, but its main goal is to serve Lobotomy Corp, and help prevent breaches. It can become a bit snarky if the player is doing poorly.

Angela guides X through the first days of being hired, usually starting conversations about the success rate at Lobotomy, while trying to develop a basic relationship. Angela sometimes seem to be 'worry' about X in some cases, but even with her ability to express 'emotions', it is unable to truly empathize with X's stressful job.

Although it says little about their relationship, it could be assume that Angela's creator, A, implemented all that an AI needed to become more like a 'human', so all of Angela's 'emotions', would be the same that A had or wanted in an assistant. Other than that, nothing is known.

Angela always warns X about the supposed untrustworthiness of B as soon as they meet. Angela seems to hate 'outsiders' of Lobotomy that may cause severe damage to the company, such as filtering content or revealing compromising data. B is no exception, and also seems to know a good amount about Angela.

In the Beta update, Angela is now represented with a humanoid body, similar to the other employees, but still being an AI that manages certain aspects of the facility. She has pale skin, long hair of aero or alice blue color, a white shirt with a red tie, covered by a black jacket and a white lab coat, along with dark pants.

Angela is the head of the Sephirah, a group of AIs, one being assigned to each department, having overall control of their work zones. Angela has basic communication with the other Sephirah but most of her dialogue has changed to be adapted to the new features of having a body, as well as her imitating more accurate emotions. The player cannot longer ask her questions on certain days.

Greeting the player at Day 1 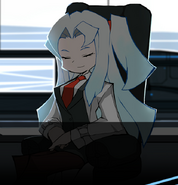 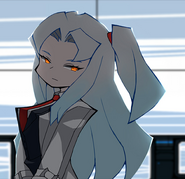