The Twelve Apostles, including the Heretic, are employees who have been baptized at some point by the Plague Doctor. In all technicality, they are abnormalities, but essentially a part of WhiteNight. They have two forms: Untransformed, where X has control over them just like normal employees, and transformed, where the Plague Doctor's second form, WhiteNight, has control over them after his "Rapture" ability. The transformation doesn't have any affect on the twelfth Apostle, who is deemed a Heretic.

The eleven transformed Apostles are tall, lanky, skinless missionaries with muscle, fat, and some bone showing. They wield cross-shaped scythes made from bone marrow and tissue, and they don half of their old masks, with their now exposed jawline showing beneath. On their backs, they don wings much like that of WhiteNight. They retain the hairstyle they had when they were human.

The appearance of the untransformed Apostle, 'The Twelfth Apostle, The Heretic', is that of how the employee initially looked, with a 16th century 'plague doctor' (not to be confused with the Abnormality) mask, resembling that of the actual Plague Doctor (Abnormality), on their face. The twelfth Apostle is ignored by the other Apostles, not becoming target of any of their attacks and gains immunity against damage, and in addition, it can confess to One Sin and Hundreds of Good Deeds to defeat WhiteNight instantly at the cost of the transformed employees. In addition, One Sin and Hundreds of Good Deeds' special work will be available as long WhiteNight is escaping and regardless of its own mood.

The eleven Apostles will attack employees and other Abnormalities in their sight with a variety of attacks. They deal strong damage, they can dash to their target, shoot a dark beam of their weapon from a long range and instantly kill employees with low health by grabbing them and slashing them with their weapons. When WhiteNight is suppressed and returned back to its containment room, the Apostles will commit suicide after getting enlightened by a light beam, similar to One Sin and Hundreds of Good Deeds when accepting a confession. 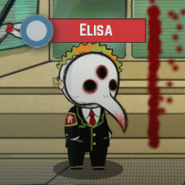 The "Twelfth Apostle", The Heretic 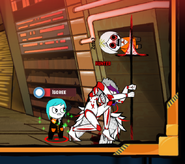 An Apostle impaling a clerk after a dash attack

An Apostle shooting a dark beam from its weapon to Alriune

Apostles fighting against Nothing There

Multiple Apostles attacking and being attacked 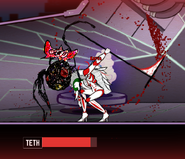 Apostle attacking Fragment of the Universe 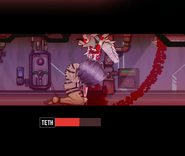