"The color of the human heart is pink, and by wearing the same color, we can blend in with people’s minds."
-Army In Black's Entry

Army in Black (D-01-106), also known as Army In Pink, is an Abnormality that takes the form of a big cartoon pink heart floating above the floor of its containment room. A single black and white soldier-looking figure is inside the heart.

Army in Black's special ability will trigger when its

Qliphoth Counter reaches 0. This counter can change in the following ways:

When using the Army in Blacks Special Work "

Qliphoth Counter reaches 0, Army in Black will breach. When it escapes, four black hearts (troopers) will appear in random departments, they are classified as

HP. They will head to the main room of the department they are in, only becoming hostile when attacked, dealing 12~15

Black Damage. If an Agent panics from their attacks, their Panic Type will always be Murder. Employees below Level 3 will instantly panic on sight of a black heart. These employees are also given shielding from the Army in Black's damage. If they reach the main room, they'll self destruct by exploding into a black mushroom cloud with a heart shape on the top and deal 30~40

White Damage to all employees in the department, and will decrease the Abnormalities'

Good. Completing 0-12 E Boxes will cause it to feel

Distressed, completing 13-22 will cause it to feel

ZAYIN Abnormalities, Army in Black is subject to Qliphoth Overloads (-6% per work, as an

E-Boxes (30) and their emotional states and

Qliphoth Counter (3). This includes its defenses when breaching:

"This Abnormality takes the form of humanoid creatures in pink equipment. Its intellectual capacity is high enough that it can verbally converse with human beings. At the very least, it seems friendly during observation and work. It has identified itself as a special force from (Redacted) and uses the pronoun “we” when referring to itself. It has continuously shown positive intentions to help humanity."

<Audio Record from First Contact with the Abnormality>
"(Omitted)
Serena: Well, I feel threatened because you’re armed. That bright pink outfit’s disturbing as well. It doesn’t belong in a place like this.
- What’s your opinion on the nature of humans, Miss Serena?
Serena: …I think it depends on a person’s experience. Why do you ask?
- It is a highly debatable topic, but this is what we think we should do. If a person is good from the start, we protect their good heart. If a person is bad from the start, we will make a good heart out of them and protect that heart.
Serena: How are you going to do that?
- We can see the color of humanity’s hearts. The color of the human heart is pink, and by wearing the same color, we can blend in with people’s minds. We will gladly get dirty for the sake of the goodhearted.
Serena: Wait, you’ll get dirty instead of the people? Is that actually a thing that’s possible?
- Indeed it is.
Serena: I’m sorry, but I just can’t trust you or what you say. It’s rather suspicious that you can just “see” the color of someone’s heart.
- If anything happens, just call us, ma’am.
(End of recording)"

"Following what was stated in the recording, the Abnormality’s will to help others is solid. We have yet to grasp detailed information around this Abnormality. Perhaps actually asking it for help could aid in learning more. However, just like any other Abnormality, we shouldn’t blindly trust it. I plan to have a suppression team ready while I pretend to ask it for help."

"So a lot’s happened up to now. To summarize the whole thing, this Abnormality is the best thing we’ve ever had here. A few months ago, I took a chance asking this Abnormality for help, and ever since I’ve been using it. I’ve gotten help from it about (Redacted) times by now. My efficiency at work has gotten so much better too. At this point, just looking at something pink makes me feel better. Those creatures bolster in a way even the greatest leaders can’t match. This Abnormality will greatly improve our employees’ quality of life."

<Excerpt from an Audio Record>
"Serena: You can do it again today, right?
- Yes, the human heart is pink, and we wear the same color. We will drive away bad thoughts.
Serena: You hear that? Yes, it’s still in the best condition. We can put this Abnormality to good use again in our next suppression. They’re so much better than human soldiers. Perhaps we should positively consider putting them as our special suppression team. On a side note, they seem to have gotten a bit darker in color, but I don’t think it’s anything to lose sleep over.
- The human heart… it’s… we must… clean…
- Even… the smallest speck… of evil… must… be cleaned…
Serena: It seems a bit less… energetic than usual. Though it’ll be fine, I think.
(End of recording)"

<Urgent Report of the Incident related to Army in Pink>
"We’ve filed this urgent report due to the drastic change in Army in Pink. We’re still trying to grasp exactly what happened. A total of (Redacted) employees have passed away. The following audio is a recording of the assumed first casualty, employee Serena.

(Audio Recording)
Serena: An Abnormality has broken out again in the (Redacted) section. I’d like to ask if you could help us out again.
- Yes… we, the Army in Black… blend into the human heart… and drive away good thoughts…
Serena: ...Hold on. What? That’s not your line.
- The human heart… is black… we must… regularly… clean…
Serena: What are you talking about? You’re creeping me out, man.
- We’ll protect you with our black love.
Serena: Stop, I’ll call the suppression team... If you move even an inch I swear…
- We salute you, ma’am…
(The recording abruptly ends after the sound of a huge explosion)" 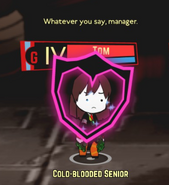 Heart on an employee while doing the "Protection" Work. 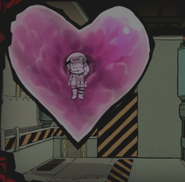 Army In black about to leave containment to protect assigned employee

Army in Black Following an employee.

Army In Black about to escape

One of the Army in Black spawning in a Welfare Team hallway. 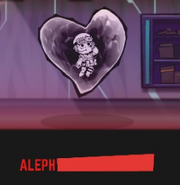 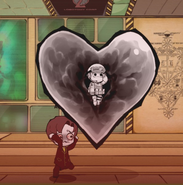 One of the Army In Black about to explode in the Main Room of the department. 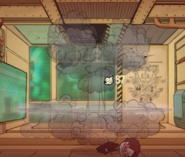 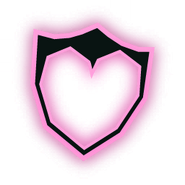 High Quality image of the heart when using the "Protection" Work.