"Eventually, intellect loses all meaning as they forget even how to exist."
- Abnormality Log

TETH Abnormality in the form of a circular black device with a white eye symbol on the middle and seems to have 2 blue light buttons at the borders. It is contained in a tank, floating in the middle when not in use.

Behavior Adjustment's ability consists of increasing the Attack Speed and

Justice) of an employee by 15 and decreasing the Max

Prudence by 10 as long as it is equipped.

If the Agent with the equipped Abnormality panics while wearing the Abnormality or the Abnormality is returned before 30 seconds has passed, the employee wearing it will proceed to lose their sanity, ripping out their eyes and dying, before sitting down and laughing one last time.

The details of its origin are unknown.

Behavior Adjustment on use 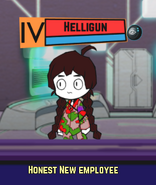 An employee equipped with the Abnormality

Ripping their eyes out

An agent killed by the Abnormality