"A month later, we came to this conclusion: There was no such “beast” in the forest."
- Big Bird's Entry

Big Bird (O-02-40) is an Abnormality in the form of a big, round, black, featherless bird, with arms instead of wings. It has 17 yellow eyes (implied to be at least 47 in one of its flavor text quotes) and a sharp beak. It holds a lantern with a wick of its melded feathers inside it.

Its special ability triggers when its containment chamber's

Qliphoth Counter reaches 0. The counter can change in the following ways:

Emergency Level 2 (Second Trumpet) is reached, Big Bird will breach. When breaching, the current department where Big Bird is located will enter into a 'Blackout'; all the hallways and rooms will go dark. With an amount of 1600

HP, Big Bird will wander the facility, and use its lamp periodically; this will give a Mark to a random employee in the same department, enchanting them. This mark is a yellow circle that will appear above the respective employee, and it will slowly turn red. Employees with the mark will receive reduced damage (Yellow = 0.5; Red = immune). After a period of time pass (~40 seconds or 2 lamp shakes), the employee with the mark will be possessed and lured to Big Bird's location. All Clerks and enchanted/possessed employees with the Mark that are in-front Big Bird will be killed instantly; Big Bird's eyes will turn red, before opening its mouth wide to decapitate the employee. During this attack, Big Bird will gain immunity to damage.

If the enchanted employee gets out of the blackout department before gets possessed, the mark will be removed. The mark could also be removed by entering We Can Change Anything (they are still going to die) or the Shelter from the 27th of March. If the camera is focused on Big Bird when walking, the screen will shake and will be unable to be moved for a short moment. When all of the employees in its department are dead, Big Bird will continue to wander the facility. It tends to seek out and move toward enchanted employees.

Big Bird was a bird who, along with Punishing Bird and Bird of Judgement, protected the Black Forest from hostile monsters. Big Bird wandered the forest, warning people about a "monster" in the forest. Judgement Bird gave Big Bird its eyes, so it could see farther to seek trespassers and could protect the forest more effectively. One day, someone questioned 'What if the monster came at night?', and Big Bird, worried, made a wick with all of its feathers, stripping itself to its skin in order to create an everlasting lantern to see through the night. Big Bird then wandered the forest and thought of a solution to the monster problem; it believed that killing humans and other creatures would "save" them from dying to the monsters. At the end, when the forest was about to enter in total disorder, Big Bird, Punishing Bird and Judgement Bird decided to merge their forms to protect the forest more effectively; this created a new bird, but instead of protecting the forest, the bird destroyed it. It is unknown when the birds decided to separate themselves.

When Lobotomy went to the forest to verify the tale, they didn't find any "monsters" or creatures: The only thing left was Big Bird.

Big Bird's habit of killing people in order to prevent them from being killed more brutally carries over into X's Facility, where it will try to kill researchers in an attempt to provide salvation from the usually gruesome deaths caused by other breached abnormalities.

Big Bird responds to the four works in order of best to worst:

Distressed, completing 8-13 will cause it to feel

E-Boxes (20), emotional state and its

Qliphoth Counter (5). This include its defenses when breaching:

"A large, many-eyed bird that patrols the dark forest with an everlasting lamp. Unlike regular birds, it lacks wings and has long arms instead with which it can pick things up."

"...(Omitted) would stare intently at anyone it found, young or old, and bite their head off. There is a tale of a beast that lies in the deepest, darkest part of the forest who dazzles creatures away never to be seen again. To protect all creatures from the beast, the big bird burned all of its feathers to make a wick, and then made a lamp that would burn forever. With this eternally lit lamp, the big bird wandered the forest, warning the creatures to not stray too deep into the trees. Thanks to the large bird, fewer creatures fell victim to the beast in the forest. However, it was still concerned for the creatures still being killed by the beast. An idea struck the big bird’s mind: “If I kill the creatures first, then no one would be killed by the beast!”
Since then, only rumors of a beast that would bite your head off flew around the dark forest. It is said that the beast carefully examines and stares at its victims to see if they are the beast that lures helpless creatures away.This is a tale from a town in the <Location Redacted> area. We heard the tale from the town's oldest inhabitant, <Redacted>. Although there is a general assumption that the tale was told to prevent children from entering the forest, it is uncertain who first inherited the tale."

“We can’t do anything while the Abnormality has its eyes open. It stares intently, and as it keeps staring…(Omitted). This is why we need to put it to sleep first. We can only begin working when all of its numerous dozens of eyes have entered into slumber.”

"And it turns out that the tale was not made up. We could find this large bird in the forest. Right after that, we tried to look for the ‘Beast that dazzles people.’ We searched through every nook and cranny of the forest. Investigated every single creature in detail. A month later, we came to this conclusion: There was no such ‘beast’ in the forest. Except for that big bird.”

“This Abnormality is completely ignorant of the common perception of death. The Abnormalities that reside in this corporation can be placed into two different categories. The first category is those who understand perfectly well what the concept and meaning of death is, and will attack our staff with the intent to kill. The second has those who are aware of the concept of death, but attack without malicious intent. This Abnormality we have contained here fits into neither of these two categories. To this bird, death in itself is salvation. If it just ripped off the head of a poor little girl who got lost in the forest, to it, there was no mistake, malice, or murder. It thinks it’s just saved the girl from the beast.” 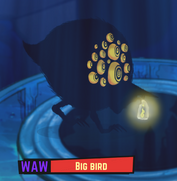 A hallway during the blackout 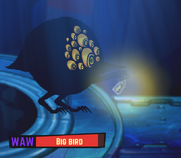 An employee with the mark 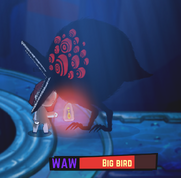 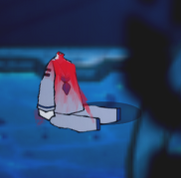