For the Perpetual Peace

"There is no monster. So, this everlasting lamp will some day go out. Slowly, faintly..."
- Angela

Big Bird (O-02-40-H) is an Abnormality in the form of a big, round, black, featherless bird, with arms instead wings, tens of yellow eyes (implied to be at least 42), and a sharp beak. It holds a lantern with a wick of melded feathers inside it.

Its special ability is "For the Perpetual Peace". Big Bird will attempt an escape when 2 or more Abnormalities are out of their containment room, when there's a panic level 2, or when its mood gauge is depleted. When escape is successful, Big Bird will start to wander through the facility. It will stop sometimes and start to channel yellow spheres above itself, marking random employees in the same department. The marked employees will wander to Big Bird's location, and once one of them reach it, they will promptly be decapitated. The player can release the employees from the aura by clicking multiple times on them, but that will also make them suffer psychological damage. When Big Bird escapes, the lights of the department will flicker before they completely go out. Upon successfully suppressing them or when moving to another department, the lights of the previous department will turn back on.

Big Bird was a bird, along with Punishing Bird and Judgement Bird, who protected the Black Forest from hostile monsters. Big Bird wandered the forest warning people about a "monster" near there. Judgement Bird gave to Big Bird his eyes, so it could see very far away to seek trespassers and protect the forest. One day, someone questioned 'What if the monster came at night?', and Big Bird, worried, made a wick with all of its feathers, stripping itself to its skin in order to create an everlasting lantern to see through the night. Big Bird then wandered the forest, thinking as a solution, to kill humans and creatures itself in a twisted attempt to "save", and ultimately prevent, creatures from being killed brutally by the monsters. At the end, when the forest was about to enter in total disorder, Big Bird, Punishing Bird and Judgement Bird decided to merge strengths to protect even better the forest, creating a new bird, but causing chaos instead. Is unknown when the birds decided to separate themselves.

When Lobotomy went to the forest to verify the tale, they didn't find any "monsters" or creatures: The only thing left was Big Bird.

Big Bird's habit of killing people in order to prevent them from being killed more brutally carries over into X's Facility, where he will try to kill researchers in an attempt to provide salvation from the usually gruesome deaths caused by other breached abnormalities.

Big Bird's room during the escape 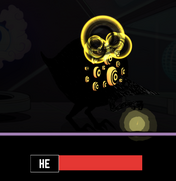 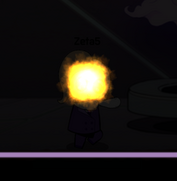 An employee under Big Bird's mark

Big Bird out of its containment unit 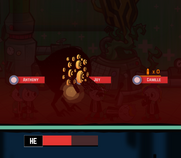 Big Bird roams the halls as the lights fluctuate
Add a photo to this gallery
Retrieved from "https://lobotomycorp.fandom.com/wiki/Big_Bird_(Legacy)?oldid=13617"
Community content is available under CC-BY-SA unless otherwise noted.