"Its scale tilted according to the sins committed."
- Bird of Judgement's Entry

Bird of Judgement (O-02-62), also know as "Long/Tall Bird" and previously as Judgement Bird, is a tall bird Abnormality with long skinny limbs and neck, with a spherical body covered with black feathers along his arms/wings. His head is covered by bandages and he has 2 small white wings of red tips on the sides of his head. His neck holds a golden balance, which tips to one side.

His ability will trigger after his

Qliphoth Counter have reached zero. The counter might decrease by 1 after a

Normal Result or with a high probability in a

Bad Result. He will breach once the ability triggers, roaming through the facility aimlessly.

He has moderately high

If an employee is killed by the damage, they will be raised up by a pole, hanging them. Bird of Judgement needs some time to perform the attack again and will continue to wander. He will continue to breach until the day ends or is suppressed.

He used to be a sentinel of the Black Forest, where he was living with Big Bird and Punishing Bird. He was a fair judge and after hearing a prophecy, he used his golden balance to measure the sins of the creatures to protect the forest and keep the peace. But someone said, "What if the scales don't tip to any direction?". He became worried, so he made that the balance only tip to one direction, to get the result in any circumstance. He used to have sparkling eyes which he could use to see through everything, but at one point, he gave his eyes to Big Bird to help him protect the forest. Long Bird covered his own eyes with ragged bandages, but still wanted to protect the forest, and after some time, he began to lose his glossy feathers due to the sunlight. As time progressed, the Black Forest started to become saturated by darkness, bad rumors, and daily fights. As a solution, the three birds merged their strengths to become a new bird to protect the forest, but it caused chaos instead, making all the creatures to leave in fear of the forest. Is unknown when they decided to separate from themselves.

At the end, he was just left with an unfair balance, which always tips to one side; probably because of the darkness and regret. He became Bird of Judgement afterwards and never stopped judging.

Where Bird of Judgement was found and how he arrived to the facility is unknown.

Bird of Judgement responds to the four works in order of best to worst:

Bird of Judgement's emotional state is divided into 3 sections:

E-Boxes (24), emotional state and their

Qliphoth Counter (2). This include his defenses when breaching: 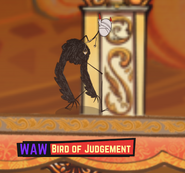 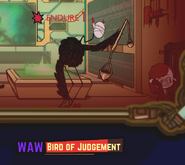 Bird of Judgement preparing to judge 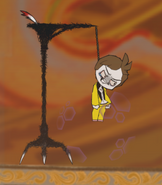 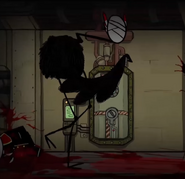