TETH
This Abnormality is Capable of Instadeath

"Many hands float in the bath. They are the hands of the people I once loved."
-Bloodbath's Entry

Bloodbath (T-05-51) is a skin-covered bathtub Abnormality. It sports a large pair of eyes which will only open when attacking an employee. Its shower head is replaced by a large hand, dripping blood constantly. The bathtub is filled with blood at a constant level that never overflows. Pale hands appear on the surface, and will stretch when grabbing an employee.

Its special ability will activate whenever an employee with

Temperance Level 1 performs any work on it, or panics in its containment. Once the employee finishes the interaction, hands will come out of the abnormality and grab the employee, pulling them into the tub, and killing them. A pale hand will then appear in the tub, adding to the others if any. The special insta-death ability is guaranteed to trigger if there are three hands in the tub, resetting the amount of hands back to zero after activation.

Bloodbath was originated from a trauma caused by a person cutting their wrists in a bathtub, and with another one finding out their craving for death.

Bloodbath responds to the four works in order of best to worst:

Like all Abnormalites, its energy output is determined by the number of PE Boxes (Positive Enkephalin boxes) at the end of the interaction.

Good. Completing 0-4 E Boxes will cause it to feel

Distressed, completing 5-9 will cause it to feel

E-Boxes (14) and their emotional state. 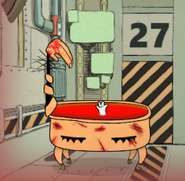 After an employee is killed by Bloodbath

After killing 3 employees. In this state, it will trigger its ability automatically when an employee enters