Blue Star (O-03-93) is an Abnormality entity that is an amalgamation of gray legs protruding from a glowing heart. The heart has a bright blue border surrounding a pitch-black center. This form is most likely formed by the human subjects who were dragged into the heart.

Qliphoth Counter can decrease by 1 when:

Temperance Level 4 who enter the containment room of the Abnormality will be sucked into the heart and killed.

Qliphoth Counter reaches 0, it will breach. It will appear in a random main room of a department and float in the middle. It has 2200

HP and remains immobile. To attack, Blue Star will periodically (every 5~8 seconds) unleash shockwaves that will deal (15~20)

White Damage to all the employees and entities in the facility. The employees who panic, by its attacks will be pulled into the Abnormality's heart, passing through any solid surfaces and dying once reaching it. Employees within and below

Prudence Level 3 that are in the same room as the abnormality will also immediately be pulled into the abnormality. It produces a constant low pitch tune that overlaps music and any other sounds made by other Abnormalities or employees. This will continue until it is suppressed or the day ends.

Blue Star responds to the four works in order of best to worst:

Distressed, completing 7-27 will cause it to feel

E-Boxes (33), their emotional state and

Qliphoth Counter (2). Its defenses are the following:

Unlocks the E.G.O. Weapon, Suit and Gift 'Sound of a Star'.

"An urgent announcement to all personnel in our company. Lobotomy Corporation supports all club activity that promotes positivity. Recently, however, we have received reports that there are group activities plotting unhealthy schemes. Due to constant allegations, we cannot help but take notice of the matter. It is against the company's rules to idolize and/or worship certain Abnormalities. Nothing is allowed to be "sacred" in this place.
Employees that try to enter the Containment Units of specific Abnormalities without authorization will face punishment. Especially if they are not in charge of said Abnormalities. If you feel an impulse to throw yourself into a certain Abnormality, that means you are "infected". It means that it is in the process of manipulating and dazzling your brain, as do other Abnormalities in this place. If this happens, please stop whatever you are doing and seek immediate mental treatment. As you have all passed basic employee training, we hope no one will be foolish enough to be misled."

"We are releasing the blacklist to the public. Those who are on this list must take 3 days of mental treatment provided by the company and will receive punishment accordingly by their respective Sephirah. We are making this list public to bring your attention to the astonishing number of infected employees around you.
Please note: Calling Emily—who killed herself after breaking into the Containment Unit of a certain Abnormality—a “martyr” will be treated as noncompliance with the company’s rules.
On a side note, we would like to praise employee Dylan's courageousness in his rescuing of employee Sophie, who was about to throw herself into a certain Abnormality. If you see any of your valuable colleagues displaying this kind of behavior, please promptly report it to the Sephirah in charge."

"Dylan.
I don't believe you turned Sophie and us over deliberately. I'm sure you were just worried about Sophie. She's locked up now. I heard that she repeatedly tried to escape, so they tied her to the bed. Tell me, is it wrong to have faith?
We are all sinners, and our Blue Star is the only sanctuary that accepts us. We will be cleansed of our sins there. We all go back to that place someday. This is an instinct. You thought Emily died when she threw herself into the Star, but she simply returned to her rightful place. She's a martyr. She has become an eternal star. The rise of a star is a brand new beginning.
Don't you hear the everlasting sound of the trumpet? When you stand close to the Star, you can hear the welcoming cheers and singing. If every employee returns to that place, only Blue Star will remain here.
Let us meet again as stars." 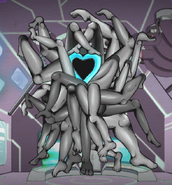 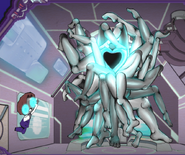 An employee being sucked by the Abnormality 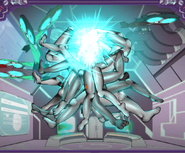 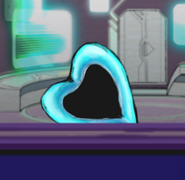