"If any system issue deletes the blur from the Abnormality, we will have to sincerely think of how to deal with the manager."
- CENSORED's Entry

CENSORED (O-03-89) is an ambiguous Abnormality which its visual form is conformed by red 'Censored' bars. While in containment, a tall censored bar is in the middle while other smaller ones are spread on an horizontal way on it, moving slightly. Its actual form is forbidden.

Qliphoth Counter reaches 0. Its counter will drop by 1 when an employee who works with it Panics or by getting a

Bad Work Result. Any Agent who is Level 4 or lower and tries to work with it will Panic instantly (

Overwhelmed), while others will get the

Hopeless Fear Level damage at the start of work, subtracting

SP from the employee' equal 60% of its

Repression Work is replaced by a Special Work called

Sacrifice. This work will bring the Wheel of Fortune (The same one of Nameless Fetus), which the player can click on it to continue or cancel it. When proceeding, the wheel will select a random employee, Agent or Clerk; in the same department and that is not panicking to be sent against their will to Censored's containment unit to be 'consumed' by the Abnormality and increase their

Qliphoth Counter by 1(Can't go over 2). If there are no more available employees in the department, it will select the ones from other department instead.

Qliphoth Counter is depleted, the Abnormality will breach. When breaching, its form will change to one similar to a horse, still conformed by censored bars. It

moves slowly through the facility, it has a great amount of

HP at 1500, and attacks at close range, dealing high

Black Damage. Any 4 or lower Level employees will Panic instantly after encountering it, and others will suffer the

Hopeless Fear Level instead. If it kills an employee by its attacks, it will engulf the employee in a big censored square, killing and spreading the organs of the employee around, with a long beeping sound, and while the process take place, the employees in the same area will suffer quick constant

White Damage. Afterwards, it will return to its previous form and summon a minion, made of the same censored bars. The minions are smaller,

slower and similar to the Abnormality in terms of power and stats, but don't perform any extra abilities. If the Abnormality pass over an employee's corpse, it will take the form similar to a drill, like in its containment, and consume the body of the employee,

healing itself by an amount and summoning another minion. It will remain breaching until suppressed or the day ends.

CENSORED is an Abnormality so visually horrifying that causes almost all the employees to become insane, having a high mental corruption, even through reports, limiting the talk and works with the Abnormality to only the high level employees. Because of CENSORED being able to even make a Manager lose their sanity, the Abnormality's true form has been covered with a blur, or in this case, Censor bars and if the Cognition Filter ever removes the blur and the manager is exposed to it, the only option would be of disposing the manager.

Is known that CENSORED is a being that can breed and reproduce with employees/humans, but the employees cannot survive the process. Even, it might only need a body to use and not a living employee, as shown by its ability during breach. It has a true meaning for its existence but so far is still censored.

Other notes taken from its log is that only employees of Level 5 or higher can resist the visual aspect of CENSORED and that the managers can indeed panic by its true form, which mean that most managers aren't of the highest level, and even considering that employees in the facility might not be under the Cognition Filter's effects.

CENSORED responds to the four works in order of best to worst:

Sacrifice). Every employee below Level 5 will panic instantly when entering its containment room.

Normal. Completing 0-16 E Boxes will cause it to feel

Distressed and completing 17-32 will cause it to feel

Normal. Its usual waiting time after a task is around 15 seconds. Its

E-Boxes (32), their emotional state and

CENSORED killing an employee in containment 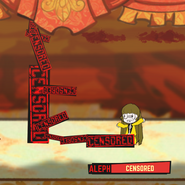 About to do (CENSORED) 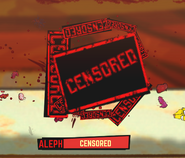 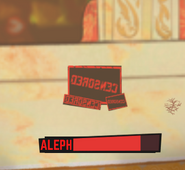 CENSORED Details unlocked
Add a photo to this gallery
Retrieved from "https://lobotomycorp.fandom.com/wiki/CENSORED?oldid=18820"
Community content is available under CC-BY-SA unless otherwise noted.