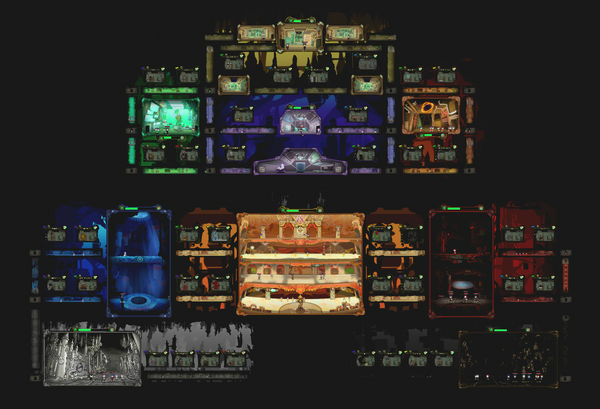 "Command and observation department has nothing much to do, right?"
- An employee

Departments are the various sectors that Facility X-394, and presumably other facilities, is and are divided into. There are ten different departments, each with their unique employees as well as various purposes to make managing the Abnormalities easier, with missions, research and Sephirah managing them.

Depending of the amount of Clerks alive in the respective departments, they provide passive functions to all the employees and the Agents who stay more days in a row assigned into the same department, will get stat improvements depending of the department.

These are different types of rooms and zones in the game that have different purposes or effects. The rooms can be connected to each other through doors, that allow the employees and entities to move from one to another. The Agents can be commanded to move to such rooms and wait there, if there are no other conditions.

The Main Room is an unique and basic room of each department. Every department has 1 Main Room and all the employees of that department begin in that room at the start of the day. Agents will try to return to their Main Rooms after works if they weren't assigned to move/stay in other rooms. The Main Rooms possess individual Healing Generators with a gauge, that are located near a side of the room. The gauge will constantly fill overtime and once complete, it will heal the

SP (6, 12 with research)of all the employees in the room and then the gauge will reset. If there is any hostile Abnormality, Ordeal or minion in the room, the generator will stop and will fill the gauge again when there are no more threats in it. However, The generator will keep going if there's Abnormality or an Ordeal If you get Netzach's Research of 'Regenerator Distinguisher Modification.'

Near the gauge, it also display the 'Office Worker Effect' as a box, that will give a boost of the respective department according to the Clerks of that department alive/sane. If there are no more alive/sane Clerks left, its effect will be negated. After unlocking the research Summon Call, the box will become a button to click on it and call all the Agents of that department back into the Main Room.

The Containment Units are the rooms where the Abnormalities are contained. Each department has a set amount of containment units, usually 4 (8 for

Architecture Team) and can be accessed normally by sending Agents to work with them. More containment units are added with each expansion slot. All of them are connected to a hallway of the department. They display at the top part the name of the Abnormality, which give access to their encyclopedia; and the

Qliphoth Counter, initially displayed as (?); at the top left their Risk Level and amount of

PE-Boxes collected, and at the left side a bar that fills during works are performed, displaying the amount of PE and NE-Boxes produced. At the middle is the Abnormality, where the player can assign works by clicking on the room.

Hallways are long and wide rooms that connect most rooms, mostly Containment Units, through the facility. Most of the time, suppression against Abnormalities occur in the hallways. Ordeals tend to also spawn in the hallways.

The Elevator Hubs are the smallest rooms, which are connected to one or two elevators, going up or down. Employees or entities that want to move between levels must take the elevator to reach them (Unless they possess teleportation abilities). The elevators by their own cannot be access and only work for quick travel. There is no a max capacity for the elevators as the employees and entities travel quickly, almost instantly, and independently through them.

Side Rooms or Minor Rooms are other rooms that don't fit with the previous types of rooms. These are often bigger than Elevator Hubs, possess more decorations and Ordeals can also spawn in these rooms. Only

Information Team has Side/Minor Rooms, with the

Information Team Side Room acting as an elevator connected to

A new Department is unlocked each 5 days and each day the player can expand one part of a department before continuing into the Deployment Phase. Every department has 5 expansion slots and unlocking the first expansion slot will unlock the department. The way they expand might be different between departments.

Architecture Team, are more unique in their form. The former is divided in 2 Teams, upper and lower, in a complete big Main Room divided in 4 floors, they get 2 Abnormalities per day and the 5 slots of Agents come unlocked from the start and are divided into their Teams, with 10 Agents in total. The former follow the normal slots for the Agents but they still add 2 Abnormalities per day.

Each Department/Team can keep up to 4 Containment Units/Rooms, starting with 1 at the first day is unlocked and increasing 1 per day until is at its maximum capacity. The exceptions to this method:

At first, Agents can only be sent to tasks into their respective departments, but after unlocking the research Joint Command from

Control Team, they can do works in other departments. Agents can be selected to move to other sections of the facility, like main rooms, hallways, minor rooms and elevator hubs. All the Agents begin in their respective rooms.

Unlocking a Department will also unlock the story of their Sephirah if not done previously, able to do their missions and do their research across the next days.