"The only advice that can be given is to remain cautious and aware of your surroundings."
- Dimensional Refraction Variant's Entry

Dimensional Refraction Variant (O-03-88) is a phenomenon Abnormality with a barely visible circular shape of grainy texture, similar to smoke. Due to its form, it's not visible to the naked eye. It floats above the floor and is intangible.

Dimensional Refraction Variant will breach immediately when its

Qliphoth Counter can decrease by 1 when an agent:

While breaching, it has 600

moves toward a targeted room, while also dealing 40

Red Damage every 0.2 seconds for 1 second (total: 200) to employees who pass through it. Employees killed by the Abnormality will be dismembered and their bodies and limbs will float on the same spot, with distortion surrounding them.

The Abnormality will keep roaming the facility until subdued or the day ends.

While breaching, Dimensional Refraction Variant will disrupt certain functions of the facility:

Dimensional Refraction Variant responds to the four works in order of best to worst:

Distressed, completing 9-16 will cause it to feel

E-Boxes (22), emotional state and its 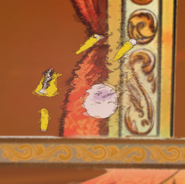 An employee killed by the Abnormality