Dream of a Black Swan

Dream of a Black Swan

"What happens when the black swan wakes up from dreaming of a white swan?"
- Dream of a Black Swan's Entry

Dream of a Black Swan (F-02-70) is a group of siblings consisting of 6 brothers and 1 sister. The brothers are human boys with short blonde hair and blue eyes who wear black nettle shirts with a green necklace holding a gem in the middle, along with black pants and orange shoes. They are the only ones standing inside the containment unit. Five of them stand at the front, while the sixth brother stands behind them at the center.

Its ability will trigger when their

Qliphoth Counter reaches 0. Dream of a Black Swan has multiple ways to reduce its counter, and when the counter decreases, the physical appearance of one of the brothers will change depending on the condition met. Each brother has a unique transformation. Possible changes include losing their eyes, their lower face melting into a green slime, and losing their legs, revealing the smiling brother behind him.

All of the next methods reduce their counter by 1. Each condition will only deplete the counter once, meaning all 5 must be activated individually to breach.

When the Qliphoth counter is reduced by other means, such as by Crimson Dawn or the Big and Will be Bad Wolf, a random brother will be selected to transform. These are not limited to happen only once.

Qliphoth Counter of the Abnormality is depleted, the "sister" will appear somewhere in the facility.

She appears similar to a large goose or bird-like creature with a black feathered body, wearing a necklace like her brothers; the neck of the bird ends in what seems to be a beak, revealing the head of the Abnormality. She has gray skin and smooth blonde hair (similar to her brothers); her head composes of two heads fused together at the eyes, giving her two mouths and noses, and three eyes. She has feathered arms with gray hands and dark wings, and holds an umbrella with an orange striped handle and black feathers. She has 2 orange striped humanoid legs.

The sister has moderately high

Movement Speed and roams the facility, smacking other employees with her umbrella, dealing 5~8

Red Damage at close range. She can open her umbrella and move forward with it, deflecting damage taken at her front back to the attackers. If she passes near another Abnormality's containment room and it possesses a

Qliphoth Counter, it will drop by 1; if it reaches 0, it will trigger the ability of said Abnormality, leading to more breaches or other events.

After she takes enough damage, the beak will close and she will change to be more like a swan. Her attacks remain the same, but with a new addition: She will stop to let out a screech, decreasing the

Qliphoth Counter of nearby Abnormalities by 1 and dealing 30~45

White Damage. She will remain in the facility until suppressed or when the day ends.

Elijah is the sister of the 6 brothers. They were once a poor family living in a city. Their parents passed away at some unspecified point. Elijah continued to provide for the family as the only one with a job, as her brothers no longer had the will to work after constant failures.

Sometime after, the city was covered with a grey fog that some people reported making them feel nauseous. Gradually people began to leave the city due to the fog. Elijah and her brothers remained, while she made clothing out of nettle that she believed would resist the effects of the fog.

Soon after the clothing is finished, Elijah collides with a stranger that appears to be fleeing from something. She tries to offer him help, but blood and green goo begin to ooze out of the orifices of the stranger's body, accompanied by a roaring in the distance. Elijah begins looking for her brothers as the city is in chaos, filled with panicking citizens and "black, wet, and smelly debris". She sees her brothers in the distance before succumbing to the effects of the fog.

What happened after is unknown, but Elijah turned into the Black Swan, who still roams around when her brothers are in danger. Although the nettle clothing seemingly helped save the brothers from the fog, they show various symptoms during containment when their Qliphoth counter drops. When and where they got captured is unknown, but they were presumably extracted from the aforementioned city.

Dream of a Black Swan responds to the four works in order of best to worst:

Dream of a Black Swan's emotional state is divided into 3 sections:

Distressed, completing 9-16 will cause it to feel

E-Boxes (24), emotional states and their

Qliphoth Counter (5). Even when is classified as a 'Non-Escaped Object', the sister breaches instead. Her defenses are the next:

"Elijah had a large family to provide for."

"Her impoverished parents would always say: “Although we don't have anything to pass onto you, we have the most valuable treasure, honesty and diligence. These may not be of great help to you now, but they will make all of you happy someday.” "

"One day, a dense fog covered the city.
The hazy fog, thought to be a natural phenomenon at first, didn't dissipate even after a few days had passed. Some claimed it was making them feel nauseous or making them retch, but most people thought nothing of it. A lot of people continued to work and go about their days in the fog.
Of course, Elijah was one of the people who had to be okay with it. She was the only family member with a proper job, and the inheritance of poverty had left them in huge debt. Elijah had several brothers, but their wills were broken after being faced with several failures. Elijah was always tired, but she thought if she just worked a little harder, things would work themselves out. Just like what her parents used to say to her, and just like in fairy tales.
Just like that bird who eventually spread its white wings and became the envy of all."

"Some people left the city to escape the fog. They said the city was done for. Elijah didn't listen. Elijah felt queasy at times. She felt her whole body blistering.
Almost there, just a little more; if she held out just a little longer, the clothes made of nettles would be complete, and if she threw them to her brothers she once loved dearly, then the days when her family lived harmoniously could be restored."

"One day, on the way home after work, she bumped into a pedestrian running at full speed. Though the pedestrian who crashed into her was at a full sprint, he was unable to get back up, so she offered him a helping hand, asking if he was alright. He slapped her hand away and got up on his own. The pedestrian took a few faltering steps before collapsing again. The man seemed like he was running away from something; he seemed worried that Elijah would hurt him. Elijah tried to ask him what was wrong.

However, the pedestrian opened his mouth first. The simple act of opening his mouth seemed labored, so she patiently waited for him to talk. The pedestrian didn’t open his mouth to speak; he began to vomit a mixture of blood and waste.
The gooey mixture poured from his mouth at first, then it gushed out from his nose, ears, and eyes. If he hadn’t been expelling from all of his orifices, then Elijah might have tried to help him. Elijah thought she heard a shout in the distance. She left the vomiting man behind and started to walk slowly."

"What happens when the black swan wakes up from dreaming of a white swan?
There were many people amidst the fog. Some screaming, some laughing. Some wielding clubs, some curled up; bodies covered in wounds. Dark, wet, and fetid dregs were scattered all over the ground, covered in footprints.
She began to look for her brothers. Her family who needed to wear the nettle clothing to be free from the curse. Ones whom she shared happy dreams with. She saw her dear brothers in the distance. Elijah fell to her knees and finally started to puke up the thing everyone else was vomiting.
The lake ripples gently. As if a number of swans just took flight."

Dream of a Black Swan's containment 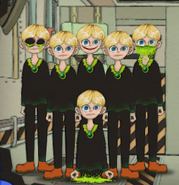 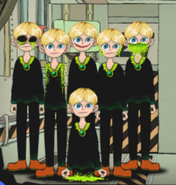 Dream of a Black Swan, all 6 changes 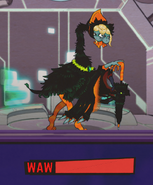 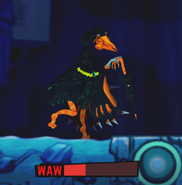 Sister in her 'swan' form 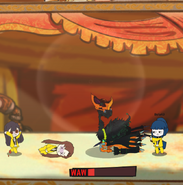 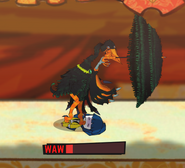 Effect when passing near a containment unit