" “What's really pitiful is people like you dying to the likes of me.” "
- Forsaken Murderer's Entry

Forsaken Murderer (T-01-54), previously known as Abandoned Murderer, is an Abnormality in the form of a near bald man with grey, asphyxiate-colored skin and a snapped neck. Despite the fact that the neck appears to be entirely fractured, he is still living. He wears a straight-jacket. While his mood is low, the head will change into a metallic shell-like shape, comparable to that of a head cone.

His special ability will trigger when his

Qliphoth Counter reach 0. After finishing a work, his head will turn into metal until the waiting time is over. If he got a

Bad Result, his counter will decrease and when reaching zero, he will breach.

Once breaching, Forsaken Murderer crawls on his knees around the facility with his metallic hammer head. He possess low

Movement Speed, usually outrun by panicked clerks. When near or next to an employee, he slams his metallic head onto the ground where they are or were located, dealing

Red Damage (2 ~ 4) in a small area in front him if the employee does not get out the way. The targets in the area of attack might receive different amount of base damage. He tends to follow nearby employees, including Clerks, changing his path when the target leaves the room.

Forsaken Murderer was once a feared, emotionless killer incarcerated in a federal prison. Originally sentenced to death, some researchers decided to use him as a test subject to cure some unknown disease. The administration of unknown chemicals to Forsaken Murderer's body ended up curing his violent behaviors at the cost of his 'humanity.' The excuse of the researchers for doing this being that they cured a disease. He was then unrestrained because the researchers stated that he "no longer had any intention to attack". After some time, Forsaken Murderer said that his head was turning into metal, and started to hit his head against objects and solid surfaces. After a severe injury, the researchers had no other option than re-restrain him. As they no longer had any reason to fear him, they began to neglect him entirely.

Where Forsaken Murderer was found and how he arrived into the facility is unknown.

Forsaken Murderer responds to the four works in order of best to worst:

Like all Abnormalities, his energy output is determined by the number of PE Boxes (Positive Enkephalin boxes) at the end of the interaction.

Good. Completing 0-6 E Boxes will cause him to feel

Distressed, completing 7-10 will cause him to feel

Happy. His usual waiting time after a task is around 15 seconds and its

E-Boxes (14), their emotional state and

Information if the Abnormality can escape or not, plus his

Qliphoth Counter (1). This include his defenses when breaching:

Forsaken Murderer about to escape

Headless Forsaken Murderer. This happen when he change his head 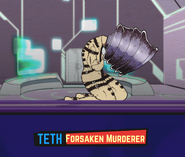 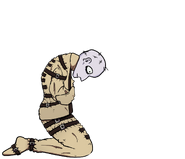 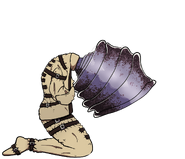