Fragment of the Universe

Fragment of the Universe

"You see a song in front of you. It's approaching, becoming more colorful by the second."
- Fragment of the Universe's Entry

Fragment of the Universe (O-03-60) is an Abnormality whose form is a black ball made of a material not on Earth, with five appendages coming off of it in an asymmetrical manner. The main portion of the body has three brightly colored heart shaped spots on it. The four long appendages are referred to as tentacles. The fifth appendage coming off of the top of the body has a shape similar to a poorly drawn heart. It has been described as having a "metaphysical form [that] can hardly be explained in human language."

Qliphoth Counter can decrease by 1 with the next ways:

Movement Speed, will roam around the facility, trying to approach to employees and attack them, dealing

White Damage (3 ~ 4) to nearby employees in the same room for an amount of time. It will keep wandering around until subdued or the day ends.

The Fragment of the Universe seems to have arrived at Earth from outer space, a member of an unknown race, having an unfixed form when it first arrived. When it was found by the company and brought to the facility, the workers started doing experiments, with studies focused on the Abnormality's reactions. After performing the experiments, the Abnormality's form started to change depending on what it would see, like a child's smile or the shape of an heart; Also trying to mimic sounds, such as the sound of 'laughing'. The current form of Fragment of the Universe is a black ball covered by 'hearts' of different colors, probably caused by the experiments, and is able to produce unknown sounds, implied to be a 'song', named by the employees as "An Echo From Beyond". In some cases, when employees attempted to interact further with the Abnormality, they received severe mental damage, acting irregular, thus being placed in mental hospitals.

Where it was found, how it arrived to the facility and when the experiments took place are unknown.

Fragment of the Universe responds to the four works in order of best to worst:

Fragment of the Universe's emotional state is divided into 3 sections:

Distressed, completing 4-7 will cause it to feel

Happy result. Its usual waiting time after a task is around 15 seconds. Its

E-Boxes (12), their emotional state and

Unlocks the E.G.O. Weapon and Suit 'Fragments from Somewhere'.

Employee, upon hearing the song[]

Fragment of the Universe's containment 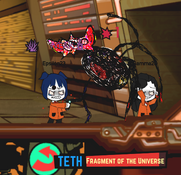 Attacking with its basic attack

Singing 'An Echo From Beyond'