Fragment of the Universe (Legacy)

Fragment of the Universe (Legacy)

Echoes from the Beyond

"They won't be interested in anything in their lives, once its tentacle penetrates them. Rumors say some employees yearn to be penetrated by the tentacle."
- Angela

Fragment of the Universe (O-03-60) is an Abnormality whose form is a black ball made of a material not on Earth, with five appendages coming off of it in an asymmetrical manner. The main portion of the body has three brightly colored heart shaped spots on it. The four long appendages are referred to as tentacles. The fifth appendage coming off of the top of the body has a shape similar to a poorly drawn heart. It has been described as having a "metaphysical form [that] can hardly be explained in human language."

Its ability is "Echoes from the Beyond" which is triggered when its mood is depleted or by an employee panicking in its containment room. The abnormality only deals Mental Damage against non-Optimist employees while working.

When its mood is depleted, Fragment of the Universe will change its form and start to breach. It can also escape immediately when an employee panics in its containment room. While breaching, the Fragment of the Universe will roam around the facility, stopping sometimes to sing its 'song', dealing constant Psychological Damage to nearby employees in the same room for an amount of time. It will try to approach employees and begin attacking them, dealing minor physical damage and strong psychological damage. It will keep wandering around until subdued or the day ends.

The Fragment of the Universe seems to have arrived at Earth from outer space, a member of an unknown race, having a unfixed form when it first arrived. When it was found by the company and brought to the facility, the workers started doing experiments, with studies focused on the abnormality's reactions. After performing the experiments, the abnormality's form started to change depending on what it would see, like a child's smile or the shape of an heart; Also trying to mimic sounds, such as the sound of 'laughing'. The current form of Fragment of the Universe is a black ball covered by 'hearts' of different colors, probably caused by the experiments, and is able to produce unknown sounds, implied to be a 'song', named by the employees as "Echoes from the Beyond". In some cases, when employees attempted to interact further with the abnormality, they received severe mental damage, acting irregular, thus being placed in mental hospitals.

Where it was found, how it arrived to the facility and when the experiments took place are unknown.

Fragment of the Universe responds best to consensus, likes violence, hates cleanliness and doesn't care for nutrition or amusement work.

The Fragment of the Universe is an easy to average Abnormality to manage. Since one Life style can negate all the damage dealt that would be received from failing at work. However it can be a bit of trouble while breaching.

The Abnormality's mood gauge can be increased with 2 works, Consensus and Violence. It is not recommended to keep the Abnormality constantly in a 'Happy' state (except if it enters in the 'Mood Rating at its Best') because Fragment of the Universe doesn't produce energy in its happy mood, instead draining it. To produce energy, leave it in a Neutral or Distressed mood, but don't let it get depleted. Agents of level 2 or higher can easily handle the average psychological damage that the Abnormality deals. Optimally, the player should use Optimist employees, since they will not receive any damage when failing a work.

Fragment of the Universe about to escape 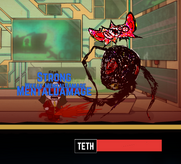 Fragment of the Universe attacking a clerk 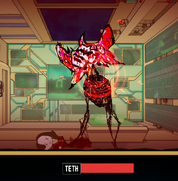 Fragment of the Universe singing
Community content is available under CC-BY-SA unless otherwise noted.
Advertisement