"The more blood it has, the more beautiful it is."
- Grave of Cherry Blossoms' Entry

Grave of Cherry Blossoms (O-04-100) is an Abnormality with the appearance of a dark brown/blood color tree, having a hole between the trunk and its roots, with a pair of hands visible in its interior. The tree starts without any leaves or fruits on its branches, which only has buds at the start, but it can bloom cherry blossoms in great amounts when interacting with it.

Qliphoth Counter is depleted. Its counter will decrease by 1 when getting a

Good Result or when an Agent Panics in its containment unit. At different stages, depending on its

Qliphoth Counter is depleted, no more works can be performed until the

Qliphoth Counter is not at 0, and a group of around 5 employees (Agents and/or Clerks) will be randomly possessed, under a state called 'Captive', being lured to Grave of Cherry Blossoms' containment unit. If an employee reaches the containment room, the tree will capture the employee with a long arm-like appendage coming out from the hole between its trunk and roots, taking the employee and killing them. After this, all other captive employees will be released from the possession and receive 15-18

White Damage. However, the 'Captive' employees can be released prematurely by clicking on them several times, similar to Red Shoes's possession or Void Dream's sleep ability, no penalties will be applied. At the end of either way, the

Qliphoth Counter will return back to its maximum (3), but only when an employee is killed by the tree it will remain in its current form. Otherwise, it will return to its first form and repeat the process.

When another employee works with it when fully bloomed, at the end of the task, the tree's flowers will slowly fall down and in a bright burst of pink light, all the employees in the facility will have their

SP fully healed. Afterwards, it returns to its first form.

Part of its origin is currently unknown, but seems that for the tree to reach 'full maturity', it needs a corpse to consume, and after one person else sees the tree, it will drop back to lose all its flowers and remain with buds to repeat the process.

Grave of Cherry Blossoms responds to the four works in order of best to worst:

Grave of Cherry Blossoms' emotional state is divided into 3 sections:

E-Boxes (12), their emotional state and

"A tree that stands in the middle of the Containment Unit. It never withers even if it is not given any form of nutrition. Some employees take time to rest near this tree. Employees sometimes enter its Containment Unit for leisure."

"Pansy: Did you see that new abnormality? I think you’re in charge of it.
Xavier: Yeah, I saw it. It was just a tree with some buds along the branches. I don’t think they’re going to blossom without sunlight.
Pansy: Did you start the observation yet?
Xavier: Nah, I think I’ll get to it now.
Pansy: Okay, take care."

"Pansy: Hey Xavier, did you see that new Abnormality? I think you got put in charge of it.
Xavier: Yeah, I saw it alright. Just some tree with buds along its branches. I don’t think they’ll be able to blossom without sunlight.
Pansy: Did you start making observations and writing reports yet?
Xavier: Nah, I think I’ll get to it soon enough, though.
Pansy: Alrighty, take care."

"Pansy: Heya, long time no see. How’s it going lately?
Xavier: Yo, get this! Y’know that Abnormality we talked about before? I don’t think it’s hostile. And guess what? It started blooming! It was so surreal looking at them, it felt like spring had come for the first time in this place.
Pansy: Is that okay? Usually, any sort of change is a bad omen for something catastrophic here.
Xavier: Don’t worry, it’s just some harmless little flowers. Thanks for worrying about me though."

Pansy: Bonjour again. How’s work been going for you?
Xavier: Golly, the flowers just keep blooming. I think it’ll fill up the whole unit at this rate. You should see it for yourself. It’s really beautiful. I don’t think I’d ever get sick of looking at it.
Pansy: I’d love to, man, but I can’t. I’ve been so busy lately.
Xavier: Really? Damn, what a shame… It’s absolutely magnificent, I’m telling ya.
Pansy: Hmm… You doing alright by the way? You’ve been making a lotta mistakes these days… It seems like you’ve been spacing out a ton too.
Xavier: Don’t worry, it’s nothing. I gotta head back now. Oh, I’ve been making a sketch of the tree, actually. I’ll let you be the first person to see it when I’m done."

<Audio Recording of Counseling Session>
"...Yeah, I’ve been better recently. I got better at managing
Abnormalities, too. Going to Grave of Cherry Blossoms’s chamber makes me feel weirdly amazing, like you said. I never believed that mumbo-jumbo about flora giving out a good aura or whatever…
But I guess it was true. It’s such a shame I can’t see those cherry blossoms with Xavier. I got to see his work in progress sketch when I was rummaging through his stuff one time. The actual tree was much more beautiful. It was more magnificent than everything he’d described it as. It’s such a tragedy that he went missing before seeing how it is now. If you find any Abnormality suspicious, please make sure you look into ‘em, alright?

...Yep, I’m fine now. I shook off that feeling.The cherry blossoms all fell after I saw it that time. Yet, I saw buds poking out of the branches again....Would it be alright if I oversaw the Abnormality from now on? No, it’s no big deal. I just wanna see those flowers in full bloom again. Yes, thank you."

<Notice of Advice>
"We’ve received reports about an alarming increase in the number of employees who want to view Grave of Cherry Blossoms’s containment. This fervent rush of requests is likely due to the absence of natural scenery in our facility.However, I don’t think there is any need to make a rule against it. We’ve found that our staff’s mental contamination indices decreased when looking at Grave of Cherry Blossoms.
The reason behind this is unimportant. It could be “flora giving out a good aura” for all anyone cares. The only thing that’s certain is that Grave of Cherry Blossoms captivates our employees, and they don’t know what lies beneath its roots.

Did you realize that the cherry blossoms are strikingly crimson, and its unmatched beauty is caused by its color?The more blood it has, the more beautiful it is. Our employees who are oblivious to it are drawn to it again and again… Just keep everything hush-hush for now. It’s how things work in this place." 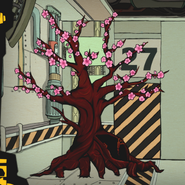 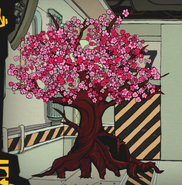 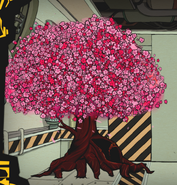 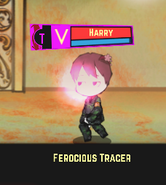 An employee under the 'Captive' possession

Preparing to burst in a pink aura

The Abnormality releasing an aura of healing