"$0 [Hammer of Light] is such a simple abnormality. It takes as much it gave to you. What price did you pay to it?"
- Angela

The Hammer of Light (O-05-48-Z) is a large, heavenly sledgehammer that cannot be accessed under normal circumstances. Both its handle and head are white. On the head, there is yellow runic writing. It is capable of deal great damage to Abnormalities. When the facility is calm, the room cannot be accessed, as large chains and a lock with runic writing on it will keep the hammer locked.

Its special ability, "Evening Twilight", can be activated during a panic level 2 situation in the facility. When the ability can be used, the lock and chains will disappear from the containment unit, and the hammer will be glowing. The player can then order a special task, which will cause the assigned employee to pick up the Abnormality and become a powerful being, changing their appearance to a white, featureless, humanoid warrior. They will create duplicates to suppress the breaching Abnormalities. The enlighten warriors will attack nearby Abnormalities and teleport to where they are. However, when the panic situation ends, the buffed employee will turn into sand, be considered dead, and no longer be usable.

The exact details of its origin are currently unknown.

The Hammer of Light likes consensus work. It doesn't care for nutrition, cleanliness, or amusements, and hates violence. However, none of these activities can be performed when the facility is in peace, as its containment unit only unlocks when a Panic Level 2 or higher is present.

Hammer of Light will always produce the same amount of energy in any mood.

Its whole mood gauge is always in the happy mood, even when the preferences chart is showing that it can enter in a neutral and distress state.

The Hammer of Light is a very easy Abnormality, because the player don't have any need to take care of it without any bad outcome and it brings a good benefit in combat if the player find it suitable for the panic situation, and also willing to sacrifice 1 agent to use it.

The Hammer of Light doesn't need any caretaking since it is locked when there are no Panic Situations currently happening and its production of energy is always moderate in any mood, although the player can increase its mood gauge by using Consensus work. The only possible reason to perform works with it is for unlocking Observations.

This Abnormality is a great benefit in combat, but most of the time its locked up, restricting the ability to perform works with it. When a Panic Level 2 or higher starts in the facility, the chains locking the hammer will disappear and an employee can be sent to use its special work to trigger its ability. The wielder of the Hammer of Light will gets possessed by it, changing appearance. After a short time, the warrior will start to seek for breaching Abnormalities, teleporting to them and creating duplicates to attack them. The wielder deals a great amount of damage and isn't affected by other effects like possessions, mental damage or other statuses. The warriors are not totally invulnerable to physical damage but instead they have high HP. Once the Panic Situation ends, the warriors will turn into dust, losing the agent who was possessed by the hammer. The best case to use the Hammer of Light is to fight multiple breaching Abnormalities which can't deal high amounts of damage, like Nothing There; and using a low level agent to avoid a great loss. Remember that the Hammer of Light just can be used once per Panic Situation, so try to expect a scenario where they can win the battles to avoid an early loss.

The Hammer of Light, waiting for a 'hero' to wield it

Hammer of Light's room locked by the "sakrifike" seal 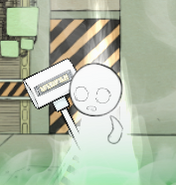