Lobotomy Corporation Wiki
Register
Don't have an account?
Sign In
Advertisement
in: Abnormalities, HE, Trauma,
and 2 more

Old Hugs that we Missed

HE
This Abnormality is Capable of Instadeath

"Now the teddy can see the world that he could not see with only one eye."
- Angela

Happy Teddy (T-04-06-H) is a large, worn-out teddy bear with a chewed ear, a single white button eye, brown matted fur, a light brown muzzle, and a faded green ribbon around its neck. Its stuffing spills out from multiple tears in its fabric.

Its special ability is "Old Hugs that we Missed". When an employee enters Happy Teddy's containment room, it will hug the employee tightly, choking it to death. The ability is triggered only upon:

Happy Teddy's story can be deciphered through its Flavour Text when performing work on it. It can be said that Happy Teddy was packaged in a big decorated box for the birthday of a girl of 7 years old. Happy Teddy enjoyed all the nights with the child, remembering the hugs that they gave to it. But as time passed, the child grew up, and Happy Teddy was abandoned in a wardrobe. It never forgot the girl.

How Happy Teddy 'came to life' is still unknown, as well where it was found and how it arrived in the facility.

Happy Teddy loves hugs, but for fear being abandoned again, it will not let the person hugging them go, squeezing them so tightly that they suffocate and/or are crushed to death.

Happy Teddy responds best to amusement work. It likes cleanliness and consensus work, and hates violence and nutrition. Happy Teddy has a sixth option titled "Hugging", which appears to raise its mood the most and boost its energy production. Only Optimists and Pacifists can perform "Hugging".

Happy Teddy is a complex Abnormality to take care of, not mostly of the threat, but due to its conditions to trigger its own ability. When having Happy Teddy, the player have to remember the Life Style of the employees in the current department and check which of them can perform its special work, 'Hugging', which can only be performed by Optimist and Pacifist agents. Assign other agents if none of the current department satisfy the needs.

Happy Teddy's mood can be increased by performing Amusement, Consensus, Cleaning and its special work, 'Hugging', with a energy boost. Since repeating the same work twice will cause Happy Teddy to trigger its ability, and not performing the special work after any other work can end in killing the employee; always start with any work (Except Hug), followed by the special work, and repeat or vice versa. Remember to don't send the same employees twice when working to avoid causalities.

Try to use agents of level 2 or higher, since Happy Teddy can deal average Psychological Damage when failing at work, leading new agents to panic.

The best way to take care of Happy Teddy is to have 2 employees, one of them of Optimist or Pacifist Life Style for the special work, and the another agent must have at least one of the other three works. Perform the previous work order (Hug, any work except Hug, repeat), using the mentioned employees. If no other events limit your selected agents, this simple strategy will be enough to keep the Abnormality happy. If you don't remember what agent you sent first, check the Work Log of the encyclopedia. There you can see which agent started and finished their work.

If you left Happy Teddy for a while in its bad mood and is about to get depleted, maybe the best is just to left it like that for the rest of the day, since once it enters in that state, its ability will trigger with the first employee who enters to its room. 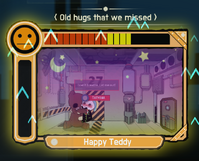 Old hugs that we missed kills an employee 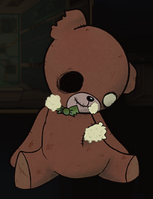