HE
This Abnormality is Capable of Instadeath

Happy Teddy Bear (T-04-06) - known as A Teddy Bear before reaching Observation Lvl. 2 - is a large, worn-out teddy bear with a chewed ear, a single white button eye, a black hole in place of the other eye, brown matted fur, a light brown muzzle, and a faded green bowtie around its neck. Its stuffing spills out from multiple tears in its fabric.

Its special ability is activated when an employee enters Happy Teddy Bear's containment room. It will hug the employee tightly, choking it to death. The ability is triggered only upon sending the same worker twice in a row. Triggering its ability will also consume 1 work.

However, the employee trapped during the hug will enter into an 'Out of Control' state and will die after the task waiting time ends. If the player ends the day before the employee's death is confirmed, the employee can survive for the next day.

How Happy Teddy Bear 'came to life' is still unknown, as well where it was found and how it arrived in the facility.

Happy Teddy Bear loves hugs, but for fear being abandoned again, it will not let the person hugging them go - squeezing them so tightly that they suffocate and/or are crushed to death.

Happy Teddy Bear responds to the four works in order of best to worst:

Good. Completing 0-5 E Boxes will cause it to feel

Distressed, completing 6-10 will cause it to feel

E-Boxes (15) and their emotional state.

Information if the Abnormality can escape or not: "Non Escaped Object" 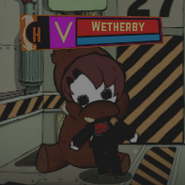