"However, if enough sarira to make everyone watch in awe come out from you, your name will be sung through generations."
-Heroic Monk's Entry

Heroic Monk (D-01-110) is an Abnormality in the form of a tall buddhist monk wearing a chinese hat. He holds a tall staff in his hands and wears large rosary beads on his neck, with a bag on his back.

Qliphoth Counter decreases by the next ways:

Insight work with Heroic Monk, it will heal some

SP of the employee.

Qliphoth Counter is depleted, the monk will change its appearance and breach containment. It has moderately high

Movement Speed. It will crawl around the hallways, attacking nearby employees. It will perform a swipe attack which deals

Red Damage. It will also perform a charged attack where it will build up power in place for a while, and then charge forward across the area it is in, with its mouth open. The next target that it impact will receive a heavy amount of 250

Red Damage and then stop. It will also stop upon reaching the end of the room. It will remain breaching until suppressed or the day ends.

A Buddhist monk, travelling to spread his wisdom, visited a town to see the cremation of another beloved monk. However, he and the rest of the townspeople were confused by the lack of sarira (crystals formed in the ashes) produced by the body, as he was a noble and generous man.

When returning, the monk came across an old man, who began questioning him if he was truly worthy of reaching Nirvana when he died. He directed him to the pagodas near the town and vanished without a trace, the monk left self-conscious and pondering. When the monk awoke that night, he went on a walk and found himself at the pagodas, where he presumably ate the sarira of the monks the temple was built for. He became a monster with a shattered bead and terrorized the town, eating any boxes of sarira left out unattended.

It is unknown how the Heroic Monk came to the facility, although it's likely they found him near the said town.

Distressed, completing 7-14 will cause it to feel

E-Boxes (22) and their emotional states and their

Information if the Abnormality can escape or not, plus its  Qliphoth Counter (3). This include its defenses when breaching: 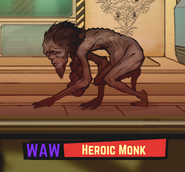 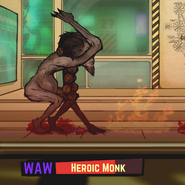 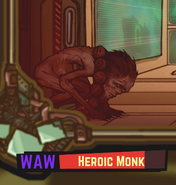 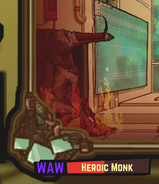 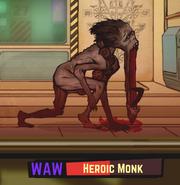 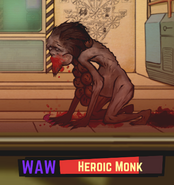 When successfully attacking with its charge ability 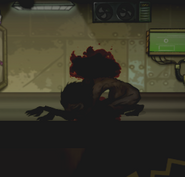 Heroic Monk Details unlocked
Add a photo to this gallery
Retrieved from "https://lobotomycorp.fandom.com/wiki/Heroic_Monk?oldid=18816"
Community content is available under CC-BY-SA unless otherwise noted.