"Tales say that the moon bewitches man, yet in reality, it is the man that despairs at the moon."
-Il Pianto della Luna's Entry

Il Pianto della Luna (D-01-105) (or simply La Luna) is an Abnormality in form of a duo; a female pianist and an old-fashioned piano. The piano has gold decals on the front and melted candles on top. At its feet, there are blackened and shrunken heads.

Il Pianto della Luna's special ability will trigger when its

Justice of all employees in facility will be boosted by 10. After the performance the employee's

Qliphoth Counter reaches 0, the woman will burst into black flames and appear out of the containment, somewhere else in the facility. During breach she wears a mask and uses her cane as a weapon. She deals average (14~16)

Red Damage during her regular attack and high (30~45)

Black Damage during her special attack, a charge attack with black flames. She will return into her containment room when the performance (When triggered by the special work, making the employee unable to get out) is over or after being suppressed. She possesses high

E-Boxes have been filled, and will start to take 4-5

Part of the pianist's origin comes from a newspaper's information that tells how she was a greatest pianist who plays Sonata, and where the third movement came, the audience could barely stay seated. After an unspecified amount of time, she left her place to go to the 'moon', leaving behind the piano that she used to play.

When the time came to contain the Abnormality, the employees met a silent woman covered by a veil and the piano of the pianist. People who approached the woman, soon playing, regardless of the knowing of music arts or how to do the performance, they played Sonata perfectly. However, those who play the first movement tend to disappear to the 'moon' without a trace.

Information if the Abnormality can escape or not, plus its Qliphoth Counter (3). It is classified as a 'Non-Escaped Object', but it is the pianist that breaches. Her defenses are as follows: 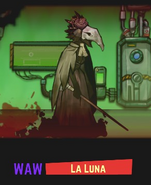 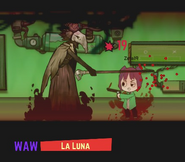