"She was so sad that she had to leave her dear friends behind, so she came up with a brilliant idea!"
- Laetitia's Entry

Laetitia (O-01-67), also known as A Wee Witch, is a humanoid Abnormality having the appearance of a small girl with pale skin, gray round hair, red tips and red eyes. She wears a pair of golden jingle bells behind the side of her head, a red bonnet, a red ribbon around her neck, a red and white dress with a pair of red shoes and dark socks or pants. She moves in a mechanical way, more or less acting like a robot instead of a human. When working with her, the sound of a music box can be heard in the containment room.

Her ability will trigger when she gets a

Normal Result. When this condition is met, she will give a floating heart-shaped gift which will follow the employee and upon reaching them, it will stay above their head.

The 'Gift' acts as a mark and when an employee with the Gift attached to them tries to go to the containment room of an Abnormality who is not Laetitia to work with it, the heart will show cracks and shake in increasing rate as getting closer to the half of the distance needed to travel to perform the work order. Once they reach half of the way to perform the work, counting from the point where the employee was ordered from, the employee will explode, killed instantly and a rainbow spider-like creature with multiple eyes will emerge from the corpse of the employee. If the player cancels the work, the heart will return to its normal state, avoiding the death of the employee. The Gift will be removed at the end of the day.

The minions, named 'Little Witch's Friend'; have an amount of

Red Damage. It has average defenses to each type of Damage and they will focus on the nearest target in the room, often following it to other rooms. It will remain breached until subdued or when the day ends, but will not subtract LOB Points when the day ends.

Laetitia's origin is vague but it is said that she comes from a far place that enjoys laughter and which can be assumed that's where her friends also come from. She has many friends that couldn't come, but she hid them inside 'gifts' to give them to people that she like and cheer them up with a 'prank' when the friend comes out of the gift.

By the last entry in her story, it is assumed that Laetitia came to the facility on her own due to the dark and gloomy ambiance of the place that affect its employees, staying and wishing to make them smile and cheer them up with her pranks.

Laetitia responds to the four works in order of best to worst:

Good. Completing 0-6 E Boxes will cause her to feel

Distressed, completing 7-10 will cause her to feel

E-Boxes (16), and their emotional state.

Information if the Abnormality can escape or not. The defenses displayed are of the minions' stats, since Laetitia is classified as a "Non Escaped Object": 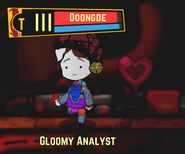 Heart Gift with cracks (When going to work with another Abnormality) 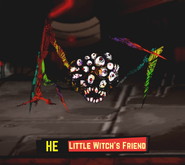