"Old stories are cruelest things. Lovely fairy tales have endings, but what about their lives?"
- Angela

"Tell me if you ever see that Furry Bastard."
- Little Red

Little Red Riding Hooded Mercenary (F-01-57-H), or Little Red for short, is a humanoid Abnormality in the form of a woman of yellow eyes, wearing dark clothes and a red hood covering the upper half of her face, and wearing a mask resembling sharp teeth, covering the lower part of her face. She has several scars on her body and when in combat, she uses a short black axe or scythe and a gun or pistol. Her face will turn red when confronting the wolf, revealing her true face.

She is currently one of two unique abnormalities in game to have a counterpart, the other being her said counterpart abnormality, Big and Might be Bad Wolf.

Her special ability is "Memories of Scars". When another Abnormality or Abnormalities are breaching, Little Red will have a special work option available named 'Request' if she isn't in her bad mood. The player can select the special work to show the 'Wanted' Abnormalities breaching and select one of them for Little Red. Prices are below the portrait of the wanted Abnormalities, which is the amount of energy that needs to be paid when Little Red successfully finishes the contract. When one of them is selected for the contract, their portrait will appear above Little Red and she will run out of her containment room to track the Abnormality and attack it.

Little Red possess a variety of attacks with her axe and gun, shooting from long range and doing quick attacks with her axe and also being able to throw it across the room. Little Red still has a health gauge and Abnormalities may attack her. If she is defeated while attacking a 'Wanted' Abnormality or when the wanted Abnormality is defeated, she will return to her containment room. Little Red's attacks can also deal damage to nearby employees and Abnormalities. If Little Red threw her axe before, she will have to pick it up to use it again. Unlike other Abnormalities, Little Red can't be suppressed when breaching due to the contract.

When Big and Might be Bad Wolf escapes, Little Red will escape immediately if he gets too close to her or her containment room, and she will proceed to chase him and will only focus on attacking him. Her appearance changes and she will not stop until Big and Might be bad Wolf is back in his containment room. Little Red's contract priority will keep always the wolf above any other Abnormality. This means that she will stop attacking any other Abnormality in her contract to hunt the wolf instead. If the wolf is defeated while Little Red was hunting him, she will not return back to her containment until every other breaching Abnormality is suppressed, going to attack them too. The new appearance will remain afterwards, until is back to her containment unit.

Little Red is assumed to follow the same origins of the tale of the same name, and the twist of her story maybe occurred when facing the Big Bad Wolf at the end of the tale. Although is unknown what happened at the end, her scars probably were the outcome of such event, with the Big Bad Wolf escaping somehow and creating her reason of intense 'revenge' to kill the wolf. Afterwards, she left her previous life to become a wandering mercenary, probably at the age of 15 or higher, training and working for contracts, without any place to stay. Where she got her weapons are unknown.

Where Little Red was found and how she arrived to the facility is still unknown, but maybe one of the reasons that she wanted to get in the facility is maybe to encounter the wolf. 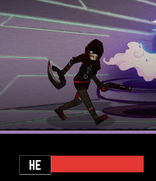 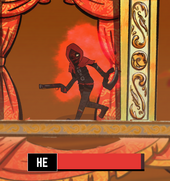 Little Red arriving back to her containment room 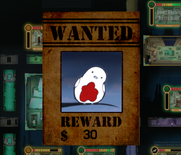 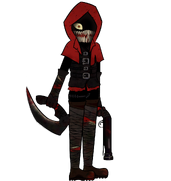 Little Red with her mask on (close-up) 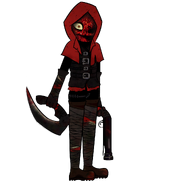 Little Red with her mask off (close-up)
Add a photo to this gallery
Retrieved from "https://lobotomycorp.fandom.com/wiki/Little_Red_Riding_Hooded_Mercenary_(Legacy)?oldid=13659"
Community content is available under CC-BY-SA unless otherwise noted.