"...and my dear employees, I do hope you all put on the gas masks we distributed to you before we enter."
- Melting Love's Entry

Melting Love (D-03-109) is an Abnormality taking the form of a pink slime creature, resembling a female humanoid. Its irises are dull white, with dark red schlera. The slime of its body flows down like its hair, and into a pink puddle.

Melting Love's first ability will trigger when an employee first performs a work, other than

Repression, on the Abnormality. If this happens, she will give them a blessing (D-03-109-1) resembling a slime heart that follows the employee before they leave the room, giving the blessed employee a special state. Upon exiting, a pink heart will appear on the employee, and pop afterward.

The employee in this special state will heal 30

SP every 15 seconds, have an increased

SP after completing a work with corresponding abnormality. On the other hand, the employee will create a pink explosion every 10 seconds, spreading several slimy particles around them. When the explosion occurs, employees or clerks in the same room have a 25% chance of gaining a small slimy mark on their cheeks, entering phase 1 of the infection. After about 50~60 seconds, the employee's face will turn pink, phase 2 of the infection. These marked employees and clerks will heal

SP over time and perform the same pink explosion, infecting other employees and clerks with a 25% chance. The pink explosion from the blessed employee will be paused for 30 seconds if the employee with the slime heart preforms

Insight Work and generates 24 or more

PE-Boxes will cause all marked employees to be immediately transformed into slime minions. The blessing remains until the end of the day and only one blessing is given at the same time.

If the marked employees or clerks are not taken care of or the day is not completed before transformation (100~120 seconds), they will be eaten by slime from below and turn into a

HE class slime entity with classification code D-03-109-2, with their skeleton being the only thing left of them inside the slime, becoming aggressive entities. They possess average movement speed, low

HP at 200 and deal moderate

Melting Love's second ability will trigger when its

Qliphoth counter can be reduced when getting a

Normal work result, as well as if the blessed employee does

Repression work. If the blessed employee dies, the heart will be removed and the Abnormality will drop her

Qliphoth Counter to 0. She will also drop her

Qliphoth Counter to 0 if half of the alive employees in the facility are infected while the blessed employee is still alive.

When the Qliphoth Counter is depleted, the Abnormality will breach. When breaching, her appearance will change, revealing a hunched over creature covered with the pink slime with long arms, there are also visible bones coming from insides of the slime. All employees who have not transformed, will transform on the spot as soon as she escapes. Melting Love possess 1500

Movement Speed. She possesses a close ranged slam attack that does a decent amount of

Black Damage (15 - 25). She will occasionally fire slime from her mouth when a target is in the same area, dealing high

Black Damage (25 - 45). Employees who are hit by the slime projectile will have a pink glowing circle around them, taking 2 - 3

Black Damage every 2 seconds for 10 seconds. Employees killed by Melting Love will turn into the

HP is removed, all minor slime will stop moving as Melting Love will reach out its arm, draining a pawn of its HP as she will heal 200

HP after 15-20 seconds. It is important to eliminate all the pawns in order to prevent this from happening.

If the employee with the blessing is alive and Melting Love escapes, the 'blessed' employee will be eaten by slime from under them and turn into a

WAW class slime minion with a classification code D-03-109-1. They possess an average amount of

HP at 800 and a slightly larger size compared to other

HE class slimes. They are also faster and deal about double the amount of

Black Damage (12-20). They are still marked with the blessing, and the slime will follow Melting Love with all the other slimes. If D-03-109-1 dies while Melting Love is breaching, the Melting Love will heal all of her own

HP and enter an "Enraged" state, dealing extra damage with her attacks (Slam:

Melting Love responds to the four works in order of best to worst, varying with the next works:

Good. Completing 0-14 E Boxes will cause it to feel

Distressed, completing 15-24 will cause it to feel

E-Boxes (32) and their emotional states and its

Qliphoth Counter (3). This includes her defenses when breaching:

Employee with Gift and the Blessing

Effect after completing a work on Melting Love. 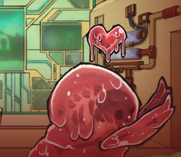 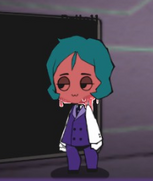 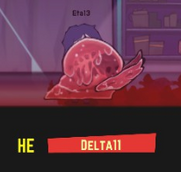