“ 'One day you'll understand. The meaning of the desperation on their faces when the roulette spins.' ”
- Nameless Fetus's Entry

The Nameless Fetus (O-01-15) is a large infant Abnormality dripping with "an unidentified yellow-brown slime". It has no legs and a large, fat body with a mouth stretching across its abdomen.

Qliphoth counter reaches 0. Its counter might decrease by 1 when getting a

Bad result. Once its

counter is at 0, Nameless Fetus will start to scream and cry, dealing constant

White damage to all the employees of the department, and decreasing the

Qliphoth counters of other Abnormalities in the same department quickly.

If there is no more available employees to be chosen from the department, it will start to include ones from other departments.

Nameless Fetus responds to the four works in order of best to worst:

Distressed, completing 7-13 will cause it to feel

E-Boxes (18), emotional state and its

"It takes the form of an unborn fetus. Its skin is covered in a mucous, sticky liquid.
The Abnormality’s bulged eyes are usually closed and small veins can be seen on its body here and there. It always seems unsatisfied, but what exactly it needs is undetermined. It has a great obsession with being “fed” - and if it is not “fed” regularly - its stress levels rise drastically. Once it reaches a certain level of stress, it cries out loudly in way that mentally harms all who may be around it."

<Excerpt from Interview Log #2-49>
Employee F2706: “I’ve never seen it smile. It always seems to want something, but we can never fulfill its desire. I guess the reason why its cries are destructive is ‘cause its unsatisfied needs are so strong. When I was a newbie here, none of my colleagues would tell me what exactly we fed it.
I thought it was just some weird milk or something like what other normal babies would eat up. It is a baby after all underneath all that grossness. But that wasn’t the case. It only eats human flesh. Can you believe it? To stop it from crying, we have to hold a drawing every so often. Do you know what that means?” "

<Excerpt from a Terminated Observation Log>
"When I first heard that the ‘Nameless Fetus’ had to be fed, I thought we’d have to give it food with like, a spoon or something. It looked too weak to do anything, and its mouth isn’t fully developed either. Later when I found out that it ate meat, I thought it’d have to be chewed up by someone first so it would be soft enough to eat. When I asked my working buddy about it, he laughed and said: “No way, that’s ridiculous. We just need to leave the food in the unit and go.”
I still thought about how in the world that fetus could eat stuff. I wondered if we served it some kinda succulent steak that’s not even available to us in the cafeteria. Out of curiosity, I decided to sneak a peek at the feeding process of the ‘Nameless Fetus’. Only level 3 and up employees are assigned to that process, but I was able to attend cause I made up an excuse that I was covering for someone.
As I nervously watched, wondering if my lie would be worth it, some people came along with large plastic bags. Does it eat that much? And when they opened the bags, I could only gape in horror. They were human corpses. And the baby ate it. How? I don't even want to imagine it. It had a large scar on its stomach; I really thought it was some kind of scar. Like a large flower, its stomach would open, dripping with slimy liquid. It was the greediest creature in the world. That day onward, I was a vegetarian."

<Excerpt from an Employee’s Diary>
"I'm Pauly. I've worked for Lobotomy for about a month now. My parents are really proud of me for getting into a Wing like this, and all my friends are jealous of me. I still make a lot of mistakes, but someday, I'll be as capable as my coworkers."

There's a special employees-only event held by our company. No one knows when or why this event is held. Even my coworker who’s been here for 5 years doesn’t seem to know. When the event starts, a giant roulette begins to spin. Everyone stops what they're doing to stare at the roulette and see who'll be the lucky winner, with desperate looks on their faces. The name of every single employee is written on that roulette. Whoever ends up being selected, they're extremely lucky. They'll be promoted and transferred to another branch of the company, "Headquarters".
In addition, their family will be gifted with an unimaginable fortune. At the headquarters, you don’t have to worry about being attacked by Abnormalities, or need to bid farewell to your dead colleagues. My senior, (Redacted), really hopes that they’ll get picked eventually. You see, their father got into an accident one day, and it takes a lot of money to keep him alive and well. I really hope the roulette picks (Redacted) someday."

"When my senior's name showed up on the roulette, I congratulated them with all my heart. Though, they didn’t seem too happy for some reason. Others gave them a hug, one by one. Everyone was crying for some reason. They said goodbye to me, shedding tears while trying to force a smile. I haven't seen them since. I’m sure they’re working under much better conditions with a really nice salary!
But, when I try to bring them up in conversation, people stop talking as if I've spoken some sort of taboo. I still remember the last thing they said to me before they left. “One day you'll understand. The meaning of the desperation on their faces when the roulette spins.” "

"The manager holds the specific right to call a special event for all the employees in the facility without any cause for occasion. When the event starts, a giant roulette will spin and select one lucky employee’s name. That employee will be promoted, transferred to a different branch, and their family will receive a yearly pension. No personnel are allowed to invade the manager’s right to hold this event. The following information is forbidden to the public eye:

<The roulette will select an employee that satisfies one of the conditions below>
1. Questions the true purpose of the company.
2. Conducts or plans unauthorized^ experiments with the Abnormalities.
3. Maintains an excessive curiosity about the Abnormalities, and conducts or plans unauthorized^ observation on them.
4. Is incapable of working due to physical or psychological trauma.
^ “Unauthorized” signifies that it is “Unauthorized by the corporation or Angela”.

<The following actions will be taken with the employee selected by the roulette>
1. Expunging all records the company has about the employee.
2. Sacrificing the employee to the Abnormality.
3. Informing the employee’s family that they have been transferred to another branch."

When activating its ability[]

Nameless Fetus' room when it start crying. The player can only activate the roulette when this appears 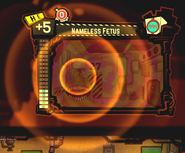 The wheel of fortune

An employee after having been randomly selected by the wheel