"And the many shells cried out one word, "Manager"."
- Nothing There's Entry

Nothing There (O-06-20) is an Abnormality that does not resemble any sort of human being, but instead a creature made of varied human parts. It has a large rectangular head with 2 mouths - a pink tongue coming out of the biggest mouth. It has 4 blue/light-blue eyes on its face, and a light blue arm with sharp claws at the top of its head. It stands on 3 legs; the two front legs are made of bones and the hind leg is a red intestine in the form of a leg with a 'foot' at the end. Its torso is made of a transparent material, revealing red, blue, and green intestines. A dark liquid drips below it. The rest of its body is made of bones or muscles.

Nothing There will breach immediately when its

Qliphoth Counter is decreased by:

Fortitude Level 4 and lower will have a lower success rate proportional to their overall level (Level 4:

Nothing There will kill the agent working on it immediately when said agent:

If an agent died in Nothing There's containment unit for whatever reason, it will take their skin, disguising itself as the employee. It will keep the new appearance for a while until another employee enters its room. It will frequently say 'I love you' while it is disguised as an employee.

If another employee enters Nothing There's containment room while it is disguised as an employee, it will instantly kill the employee and breach disguised as the second employee.

Organ pieces will block the screen of the player temporarily before it breaches. After leaving the containment room, Nothing There will appear in a random location in the facility, which could be a hallway or a Main Rooms. The player will enter into 'Disposal Mode', where they get a single shot and 10 seconds to instantly defeat Nothing There. The time of the game will be paused during this time frame. The player must click on Nothing There disguised as the previous employee to succeed. the shot deals a whopping amount of

Red Damage (10000) which instantly kills Nothing There, sends it back to its containment room, and reset the counter and form.

If the timer runs out - or the player does not shoot the correct employee - Nothing There will reveal its normal form and continue with the escape.

Suppressing Nothing There with the Disposal Bullet when breaching disguised as an agent does not contribute for Gebura's mission "Proving our Strength" or Hod's mission "I Just Want to Be a Good Person".

Nothing There will escape in its normal form when the

Qliphoth counter reaches 0 or upon failure with utilizing the Disposal Bullet in time. It has three forms that it progresses through while breaching, unless it is suppressed fast enough.

It will wander around the facility in search for a target. Once it finds a target, it will follow it's target and kill anything in its path, eventually killing everything in the facility. Nothing There will remain breaching until it is suppressed or the day ends.

Nothing There responds to the four works in order of best to worst:

Fortitude Level 4 and lower will have a lower success rate proportional to their overall level, this however doesn't change what works are better or worse.

Nothing There's emotional state is divided into 3 sections:

Good. Completing 0-16 E Boxes will cause it to feel

Distressed, completing 17-26 will cause it to feel

E-Boxes (33), their emotional state and

Qliphoth counter (1). All of its defenses are marked as 'Unspecified', due to them changing each time when in different forms.

In the Normal Form, its defenses are:

In the Shell Form, its defenses are:

In the Last Form, its defenses are:

"An Abnormality whose appearance resembles a human, but cannot and should not be human. It periodically devours employees and wears their shell. The skeleton and organs are misplaced during the process, so it takes a bizarre form."

"The Abnormality does have a tongue, however, it has no knowledge of speech and as such cannot talk; it can only make meaningless sounds. There is no telling what is inside its shell, but its skin continuously wears down, so there is a need to change and maintain the outer layer. It is insensible to pain; it may break its own bones or cut itself up to escape through a small crevice."

"Bit by bit, we discovered that this Abnormality may be evolving. It demonstrates behaviour similar to the character of the person who used to be its shell. It even makes attempts to equate itself with human beings."

"When it escapes, it wears the skin of the person it killed and mimics them. Then, without any sign or forewarning, it reveals its true/second form. In its true/second form, its resemblance is much similar to that of humanity in comparison to its earlier form. The new form is confirmed to possess bipedalism, properly aligned organs, and the addition of greater physical strength. All the employees are afraid of this form."

<A Warning of Something>
"If it has been confirmed that it has escaped and stood on two feet, there is only one thing you can do. Straighten up your posture, gather your hands neatly, and pray to whatever you believe in and observe the situation as it unfolds."

<Excerpt from Counseling Log>
“Just like how we observe Abnormalities as employees, ‘Nothing There’ observes us. Then it puts on the shell of an employee and thinks of itself as the employee that just died. The sight of that thing eating one of us is horrifying beyond words, just trying to think about it might drive me mad. Heading to its containment to check the state of its shell is a toil on your mind, too. Imagine that a colleague of yours who you chatted with just a few days ago is now sitting in that room, neck snapped, guts exposed, walking on all fours, drooling like a beast. (Omitted)

That’s not all. When I was still a new employee, no one else was willing to enter its Containment Unit, so I was forced to go work with it. It looked even worse than it does now. It was in the shape of a horribly deformed human. What’s worse, it tried to mimic humans. Doing stuff like looking into a mirror, mumbling to itself, or trying to fix its skeletal structure; it’s as if it was trying to mimic ‘us’. Who knows, it might get good enough to casually walk among us one day.”"

"<Warning>  Only employees Level 3 and higher are permitted to read this document.
(This recording is of a call from the Containment Unit’s emergency phone. Phone systems are installed in every room of Abnormalities of Risk Level HE or higher to enable quick threat response.)

Employee 1: Please pick up, please pick up. This is the Containment Unit of ‘Nothing There.’
The Emergency Response Department (ERD): Hello, this is the Emergency Response Team. What’s the problem?
Employee 1: I need a stun gun right now! There’s an emergency happening right now!
ERD: Can you please specify the reason?
Employee 1: The Abnormality… (the sounds of something breaking can be heard) It’s ripping up the employee.
ERD: Excuse me?
Employee 1: It’s killing my colleague!
ERD: We’ll respond immediately. Please identify the employee being attacked.
Employee 1: It’s uh… wait one sec. Their name’s <Redacted>. Control Team. I’m, <Redacted>. Also Control Team.
ERD: Confirmed. What’s currently happening to your colleague at this exact moment? Employee 1: Yeah, just please hurry. We need a weapon to control the Abnormality. (A loud noise can be heard, presumably the scream of the colleague) Oh god, this is…
ERD: What’s happening?
Employee 1: The Abnormality is attacking my colleague. It’s literally ripping them apart, I can’t do anything. I repeat, we need a weapon to control the Abnormality.
ERD: The Emergency Response Team has been dispatched. They’ll arrive shortly.(Omitted)
ERD: <Redacted>? What’s happening now? Is it still attacking your colleague?
Employee 1: Yeah, oh no. I think it’s done now.
ERD: Has it stopped attacking?
Employee 1: No, I mean. My colleague’s… He’s dead. Yeah, he’s dead alright.
ERD: How can you be so sure?
Employee 1: Well it’s because he looks… he’s…
ERD: Has he been ripped up somehow? What body parts are damaged?
Employee 1: All of them."

<Excerpt from Counseling Log>
"Just like how we observe Abnormalities as employees, ‘Nothing There’ observes us. Then it puts on the shell of an employee and thinks of itself as the employee that just died. It mimics the employee's usual behaviour, the way they talk, likes and dislikes, and every other visible trait. We can only guess how carefully, and for how long it has been observing the employees to imitate them. What I’m trying to say is, we can’t just treat it like some ‘dumb scary monster’. Even now, it could be strolling about wearing the shell of someone we know. This Abnormality is becoming more and more like a human. Its transformation is getting faster too. I get goosebumps just thinking about it. If the time comes when we fail to recognize it, that will be the day the company falls.We must stay ever vigilant when dealing with this Abnormality."

"The following is a recording of the abnormal behavior an employee exhibited in their last moments after they became a shell of ‘Nothing There’.

"The second employee proceeded to take immediate action upon hearing that. However, ‘Nothing There’ tore out of the shell of the first employee, revealing its beginning form. The recording only includes audio files, so what exactly happened or what kind of behavior the employee exhibited still remains a mystery. The shell with ‘Nothing There’ inside tries its best to mimic the behavior of the employee it tried to kill moments ago. The actions of the last employee it eyed, their final words, those sort of things. And the many shells cried out one word, “Manager”."

When activating its ability[] 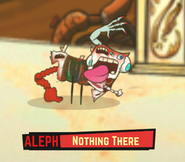 Nothing There's breaching in first form

Nothing There using blade attack 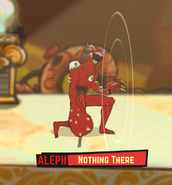 Nothing There using straight line attack