As Written in the Scenario

"'The sinner was shaken to the bizarre atmosphere of the stage, and confessed his sins. A screenplay is what makes people more honest'"
- Angela

Poor Screenwriter's Note (O-05-31-W) is an Abnormality resembling an open notebook that rests on a wooden table. The notebook contains a script intended to be used in a play. The notebook tells the story of a person who found a mask and started to murder nearby people after putting it on. At the end of the story, the protagonist is shot by a stranger, which stops the killings.

Poor Screenwriter's Note's ability is 'As Written in the Scenario', which will trigger if it remains in a bad mood for too long. Unlike other Abnormalities, Poor Screenwriter's Note will choose its own work preferences randomly depending on its own scenario. A bubble with a picture of what work it wants at the moment will appear next to it. When the employee does the work that the notebook wants, it will increase its mood by a small amount. If the employee performs an action that the Abnormality doesn't want, it will generate a large amount of energy but its mood will drop by a small amount. A curtain will then appear in the room. The curtains will start out mostly transparent, but become more visible the longer it stays in a bad mood or when more incorrect works are performed.

Once the curtain is at maximum visibility, the next employee that enters its containment room in this state will become the protagonist of the script, named 'A'. Four other employees (Priority to agents) in the same department will become the murder victims. The employees playing in the current scenario will have scrolls with symbols above them, and the player will no longer have any control over them. They cannot be suppressed or healed, either. The 'protagonist' will enter a panicked state and start to seek the other characters in order, dealing physical damage to them until they are all dead. The employees playing the parts of the 'victims' will stop any action they were currently doing. They will stand still in their current position, even if they were working on another Abnormality, and will not defend themselves at all. As the scenes progress, some text representing the 'script' will appear telling about the scenes and character's dialogue. When all the other characters are dead, the player will get a single shot and 10 seconds to either kill the protagonist, miss the shot, or kill someone else. If the 'protagonist' isn't dead when time runs out, they will be under control again.

Once the scenario ends, a 'Continue' message will appear on the screen and the abnormality will return to its normal state. If the scenario is interrupted by the day ending, all the employees with a role in the play, who weren't killed yet, will be able to be controlled. When the next day starts, the 'Continue' message will still be there, but will not affect anything.

Unlike other Abnormalities, the work preferences of Poor Screenwriter's Note depends on what action it prefers at the moment, and its preference is constantly changing.

Poor Screenwriter's Note's mood gauge is divided into 2 sections, distressed and happy. Under the 30%, it will feel distressed and above it, will be happy.

The final observation is available immediately.

Employees playing the role of the victims 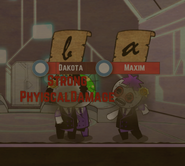 'A' attacking a victim

After all the characters except the protagonist are dead, the player have the chance to shoot or not

The 'Continue' screen that appear after the scenario ended 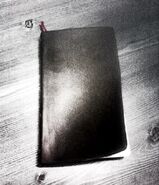 Old Picture of the Abnormality named 'Notebook of a Poor Playwright'
Community content is available under CC-BY-SA unless otherwise noted.
Advertisement