"Now it's time for my head to burst. Good day."
- Porccubus' Entry

Porccubus (O-02-98) is a creature with a long green plant body with a form similar to a mix of a serpent and a stem, covered with light yellow spines, and has a red flower with a yellow center at one of the ends as a head, with two small round eyes near the middle. It possesses a necklace around its 'neck' with a red gem. When breaching or using its ability, a small bulb like part covered with spines will appear on its 'tail.'

Qliphoth Counter reaches 0. Its counter can be raised or lowered via these methods:

If an employee with a

Temperance Level of 3 or below gets a

Good result, said employee will be killed in the containment unit.

After the counter reaches 0, it will breach, teleporting out of the containment room into a random hallway in the facility. It will stay idle in its current position until an employee gets close enough to it. It possess high

White Damage at close range when attacking. Employees with

Temperance Level 3 or below will receive 9~24

White Damage from its attacks, Employees with

White Damage, while Employees with

Temperance Level 5 will only receive 1~4

White Damage. Only employees in its attack range will be able to deal damage to it (that is to say, melee weapons are the best option in dealing with Porccubus), and it is immune to ranged attacks. Employees who panic as a result of its attack will die, laughing madly before the head bursts. It will continue to breach until suppressed or the day ends. When defeated, it will deflate and make a sound similar to a balloon.

Porccubus responds to the four works in order of best to worst:

Like all Abnormalities, its energy output is determined by the number of PE Boxes (Positive Enkephalin boxes) gained at the end of the interaction.

Good. Gaining 0-8 E Boxes will cause it to feel

Distressed, gaining 9-14 will cause it to feel

E-Boxes (18), emotional state and their

Qliphoth Counter (2). Its defenses when breaching are: 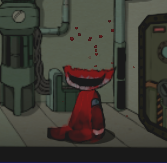 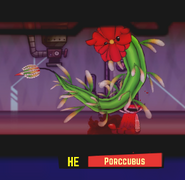