Portrait of Another World

"This portrait encaptures a moment; it is what we are destined to lose."
- Abnormality Log

HE tool Abnormality in the form of a tall empty canvas, which is held by a black metallic ornamented support. It is dusty and start empty at the beginning of each day.

Portrait of Another World's ability is a single use, which makes the employee using it be marked and painted on the Abnormality. The status mark consist in a circular gray face of hollow eyes and mouth, with black substance dripping from them. These float above the marked employees, who will be also covered in smoke or dust.

The first-marked employee, the one who is painted in the canvas, will transfer any

Damage taken from any source to a second-marked employee in the facility at a 1.5x increase. (However, this transfer will not work if the second-marked employee is inside Shelter from the 27th of March and the first-marked will retain the damage instead). The defenses still act on the damage transferred. When the second marked employee dies, the mark will move to another employee. After employees keep dying by the transferred damage or the damage transferred accumulates to 100, the portrait of the agent on the canvas will change to one that features a mask and a second change will feature what appears to be employees around a black tree. Depending on the portrait's appearance, the transferred damage will be increased to 2.0x at change one or 2.5x at change two. If there are no more agents to be marked, the first marked employee will die and the paint will disappear.

Portrait of Another World's basic information takes 2 use to unlock, the information gained is:

Portrait of Another World's containment

Portrait of Another World on use 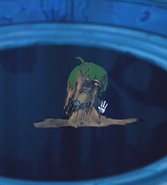 The employee melting by the portrait 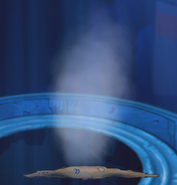 The remains of the dead employee

Portrait with a painted agent, wearing a mask

Portrait of Another World unlocked Details
Add a photo to this gallery
Retrieved from "https://lobotomycorp.fandom.com/wiki/Portrait_of_Another_World?oldid=20028"
Community content is available under CC-BY-SA unless otherwise noted.