"Dude... your “little angel” is gnawing on our colleague’s finger."
- Ppodae's Entry

Ppodae (D-02-107), is a small, white pug puppy with "puppy dog eyes" and a tailed curved in. When breaching, it changes its form to a more quadrupedal humanoid and grows to about 4x it's previous size. Its tail and legs grow larger, has a more muscular torso, and on its shoulder area possess a blue circular tattoo.

Qliphoth Counter reaches 0, beginning and a maximum of 2. When starting a work, it will bark. Its counter can be decreased by 1 with the following conditions:

Movement Speed, starting to chase employees, giving priority to Agents, to attack them with a single slam attack at close range that deals low amount of

Red Damage in a short area in front it. It takes a short time to recover and resume its attack/chase. If Ppodae kills an employee (Clerk or Agent), it will turn back into its previous form and return to containment on its own, carrying a piece of the employee that it just killed. In this state, it cannot be attacked.

Suppressing it will make the dog whimper and fall down, returning it to containment and resetting the counter. When transforming, escaping and returning, a white cloud appear on it, with small pug heads that fade soon after.

There exists a myth that at night, if you walk down the hallways of the facility, you will hear bones breaking and then you will find the cryptid 'Yeti' eating an employee.

Although the myth's validity is in question, Ppodae is linked to be the 'Yeti' and a creature of two forms. It seems to use a charm that deceive employees, falling into its 'cute' appearance and believe that is just a normal dog that needs extreme and loving care, with employees literally fighting over to who will take care of it next. Other employees can actually ignore its charming abilities and detect unusual features, like body parts that the Abnormality carries or bites. It is deduced that it transforms to seek for food, with the food being a snack or a person.

When it was captured and how it arrived into the facility is still unknown.

Ppodae responds to the four works in order of best to worst, varying with the next works:

Distressed, completing 7-9 will cause it to feel

Happy. Its usual waiting time after a task is of 15 seconds and its

E-Boxes (12), their emotional states and

Unlocks the E.G.O Weapon and Suit called "SO CUTE!!!" 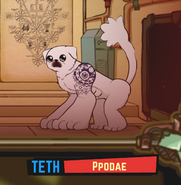 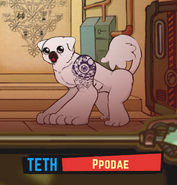 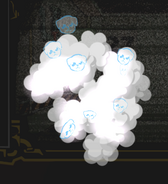 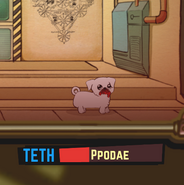 Ppodae returning to containment after killing an employee