Prophecy of the Skin

"Save us now and forevermore. The truth shall set us free."
- Abnormality Log

TETH Tool Abnormality in the form of pinkish book, which seems to be made from human remains, specially skin, bones and other issues. The open book has bloody marks and contain runic symbols on the pages. Is held up by an organic podium.

The Prophecy of the Skin's ability triggers upon use. When an employee use it, they will get an increase of

Prudence by 15 points and additionally, they will become weaker against

White Damage by 0.3. The additional

Max SP) and the additional weakness only stack up to 2.3

Prudence stat can also increase the stat level of the employee. When the Max Stat upgrade is reached, the tool will not have any use on the employee anymore but can still be used. These upgrades only last until the day ends.

If the employee panics after reading the book in the same day they used it, they will get killed by a portal that appears below them as appendages shaped like arteries drag the employee into the portal.

Prophecy of the Skin's basic information takes 2 use to unlock, the information gained is:

The book is mentioned to be a religious book with old writings of unimaginable truths but also enlightening to their readers. The believers weaved it with human skin to make its sanctity last forever. But those who mastered the truths will be called by the prophets, not able to reject their call, setting them 'free.' It was probably found on the top of an embankment in an unknown location.

How it arrived into the facility is unknown.

Prophecy of the Skin's containment

Prophecy of the Skin on use

An employee reacting to the portal appearing, immediately before the appendages appear. 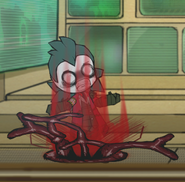 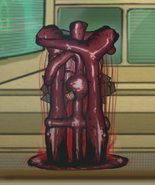 Prophecy of the Skin Details unlocked
Add a photo to this gallery
Retrieved from "https://lobotomycorp.fandom.com/wiki/Prophecy_of_the_Skin?oldid=18378"
Community content is available under CC-BY-SA unless otherwise noted.