"People have been committing sins since long ago. "Why do they commit sins, knowing it's wrong?" "
- Punishing Bird's Entry

Punishing Bird (O-02-56), also known as "Small Bird", is a small, white-feathered bird with small wings and a red mark on its chest. While in its containment room, it rests on a black perch. Punishing Bird changes its appearance to appear fully red while being suppressed.

Punishing Bird will breach immediately when its containment chamber's

Qliphoth Counter is decreased when:

While breaching, it will target a random agent and beeline straight for them, prioritizing panicked agents. It possesses fast

Movement Speed and a low amount of

HP at 200. Its attacks deal only a small amount of

Red Damage (0-1) for 3 seconds. If there are nearby agents in the area, it will move from agent to agent. Punishing Bird will stop and re-contain itself once it has dealt enough total damage. (8~13

Red Damage). If it's attacking a panicked employee, its attacks will

Agents and Clerks will not automatically suppress the Abnormality once they are in the same room but Fear Damage will still be applied.

If Punishing Bird is hit by an Agent in any way (including reflected damage by the E.G.O. Weapon from Dream of a Black Swan), the Abnormality changes form, becoming red, having its

HP increased from 200 to 1000; and replacing its normal "pecking" attack to a devastating "bite" attack, dealing heavy amounts of

Punishing Bird was a bird who lived its whole life in the Black Forest, with Big Bird and Bird of Judgement. The birds decided to protect the forest from a prophecy which said that the forest will be never the same after some terrible events, ending with a monster devouring everything. Punishing Bird decided to punish the bad creatures with its beak, but someone said 'Your beak is so small. None will find your punishment painful'. Punishing Bird, worried, grew a mouth so it could devour any creature in a single bite. As time passed, the efforts of the birds brought bad rumors of the forest, until one day, when the forest was about to fall into total disorder, the birds decide to merge their strengths together to form a new bird, but the result created chaos, and they ended their task alone in the forest.

Punishing Bird responds to the four work types in order of best to worst:

Like all Abnormalities, its energy output is determined by the number of PE Boxes (Positive Enkephalin boxes) filled at the end of the interaction.

Good. Filling 0-4 PE Boxes will cause it to feel

Distressed, completing 5-8 will cause it to feel

Normal, and 9-12 will result in it being

Happy. His usual waiting time after a task is around 15 seconds. Its

PE Boxes (12), emotional state and their

Qliphoth Counter (4). This includes its defenses when breaching: 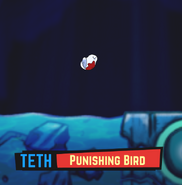 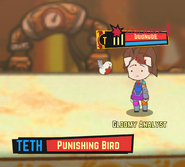 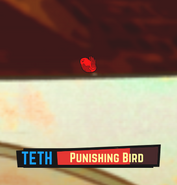 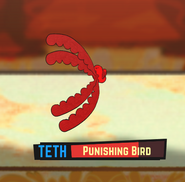 Attacking in its second form