"When a queen bee is found out to be incompetent, working bees prepare an execution for their queen. Execution is not brutal nor violent. She is a loyalty, after all."
- Angela

QueenBee (T-04-50-W) is a large, heavily mutated bumblebee. Her body is yellow with black stripes, and is segmented into tiers of red and black dismembered flesh. She has one large blue iris, a pair of bent antennae, and a pair of torn bee wings. Her head itself is severely mutilated, with each 'slice' being rimmed with small pointed teeth to resemble mouths.

Her special ability is "Spore". It activates when her mood drops to red or when an employee enters her containment room when she is in a bad mood. When an employee enters her containment room while she is in a bad mood, QueenBee will attack the employee with a cluster of yellow spores. The spores stay around the employee's head and will deal minor physical damage constantly for an amount of time. If the spores kill the employee, a Worker Bee will come out of its head. Worker Bees will attack and murder any other employees they cross, 'transforming' them into other Worker Bees, effectively increasing the worker bee population. If QueenBee remains in a bad mood for too long, she will spread spores in a large ring around her, infecting any employees near her containment unit.

Most of her origin is unknown but she was probably made artificially during an experiment with pheromones of bees. This is mentioned in her Last Observation Dialogue.

QueenBee responds best to nutrition work, likes cleanliness, and is neutral towards consensus work. She hates both violence and amusement. The player should take caution with this Abnormality, and should regularly check on her condition to avoid Spore's activation.

The Worker Bees are QueenBee's minions. They are large wasp-like creatures with long legs, small heads and abdomens, and a large thorax. Worker Bees have no eyes or antennae, but have thick 'mandibles' that resemble a lamprey's mouth. At the end of their thorax, the bees have what looks to be an umbilical cord in place of a stinger.

The worker bees will only spawn if the player neglects QueenBee long enough for her special ability to activate. The purpose of the Worker Bees is to deliver food to the queen, and will do so by murdering any employee they can find. In addition, each employee killed at the hands of one will spawn another Worker Bee themselves. Though difficult in swarms, they can be suppressed.

QueenBee in her neutral mood

QueenBee attacking an employee with her ability 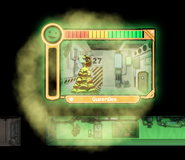