"If you feel an abdominal pain and a tingling sensation in your neck, the best thing you can do now is look at the great blue sky you'll never get to see again."
- Queen Bee's Flavour Text

Queen Bee (T-04-50) is a large, heavily mutated bumblebee. Her body is yellow with black stripes, and is segmented into tiers of red and black dismembered flesh. She has one large blue iris, a pair of bent antennae, and a pair of torn bee wings. Her head itself is severely mutilated, with each 'slice' being rimmed with small pointed teeth to resemble mouths.

Qliphoth Counter reaches zero. It might decrease by 1 after a

Qliphoth Counter is depleted, Queen Bee will spread yellow spores across the Department after a short delay, infecting random employees, Clerks and Agents; which will inflict constant

Red Damage, 8 damage every 2 seconds for 20 seconds. The infected employees will be recognizable by a group of yellow spores on them. If the employee infected with spores dies by the effect of the spores, a Worker Bee will be born from the deceased employee. Drones have 120

Movement Speed, roaming the facility and attack nearby employees, dealing (6~10)

Red Damage, and if they kill the employee, another Worker Bee will born from the dead employee.

They are classified as minions of

HE Risk Level and don't cause any penalty of LOB Points if the day is ended with them still roaming the facility.

Most of her origin is unknown but she was probably made artificially during an experiment with pheromones of bees. This is mentioned in her Last Observation Dialogue of the Legacy version.

Queen Bee responds to the four works in order of best to worst:

Good. Completing 0-9 E Boxes will cause her to feel

Distressed, completing 10-16 will cause her to feel

E-Boxes (22), emotional state and their

Qliphoth Counter (1). The defenses displayed are of the Drones' stats, since Queen Bee is classified as "Non Escaped Object":

The Worker Bees, previously named Drones, are Queen Bee's minions. They are large wasp-like creatures with long legs, defective wings, small heads and thoraxes, and a large abdomens. Worker Bees have no eyes or antennae, but have thick 'mandibles' that resemble a lamprey's mouth. They possess 6 legs in their abdomen and a pair of small arms in their thorax. At the end of their abdomen, the bees have what looks to be an umbilical cord in place of a stinger.

The worker bees will only spawn if Queen Bee trigger her ability and an employee dies due to the spores. The purpose of the Bee Workers is to deliver food to the queen, and will do so by murdering any employee they can find. In-game, they try to bite the head of the employees' off, dealing

Red Damage. In addition, each employee killed at the fangs of one will spawn another Worker Bee themselves. Though difficult in swarms, they can be suppressed easily individually. Unlike breaching Abnormalities, Drones are considered minions and will not add any LOB Points penalty to the end of the day. 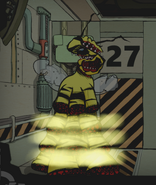 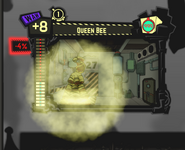 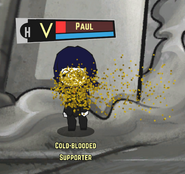 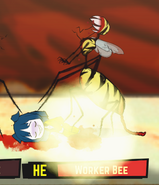 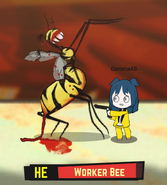 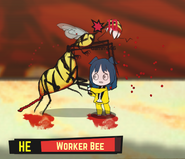 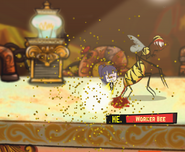 Employee killed by a Worker Bee