Edit
watch 01:54
Arcane: League of Legends - The Loop
Do you like this video?
Play Sound

"The Rabbits have come to graze the grass."
- Myo

The Rabbit Team is an external group of mercenaries who suppress dangerous entities. They are contracted and unlocked by the research in the Disciplinary Team. Upon unlocking their function, the player can call for the Rabbit Team to jump into action by clicking a square button next to the Bullets Bar.

This group of mercenaries are commanded by Myo, the leader of the team. They wear black and orange armored clothing with gas masks similar to the head of a rabbit, with long ears with black borders and an orange interior, and have glass circles for their eyes. The eye design might vary between members.

To call the Rabbit Team, the player must click the button with the Rabbit symbol, next to the bullet tab. Afterwards, the main menu of the 'Rabbit Protocol' will appear on the screen. It displays the map of the current facility, showing any departments unlocked at the moment, has a manual at the left side of the window and on the right a caution message, as well as cost at the top right corner. The player must select at least 1 department to be able to call the Rabbit Team, with the message 'Rabbit Protocol' flashing on the screen.

The information displayed in the window are the next:

The Rabbits, the mercenary members previously described, spawn in groups of 4 members while the Protocol begins. All of them are of overall Level 4, with 150 HP and SP, but not able to stand massive damage. They die immediately upon reaching 0 SP instead of panicking. The Bullets and healing from the Main Rooms don't work on them.

They roam in groups, uncontrollable by the player and attacking any entities they encounter, being Abnormalities, Ordeals, Minions or employees. They will detect entities that employees can't, such as Dimensional Refraction Variant. They have 2 type of weapons: Melee Blades and Ranged Automatic Rifles. Each rabbit is given their own damage marked on their weapons, and will not change the type they are given. The Melee weapon will have a 70% chance of dealing 17-19 or a 30% chance of dealing 5-7 of their respective damage type. When standing at long range they will fire their gun every 0.22 seconds, dealing 2-3 damage. they will continue firing for 4.4 seconds before reloading.

Their defenses are the following:

50% of the Rabbit Units eliminated:

Encountering a HE level threat:

A department under Rabbit Protocol 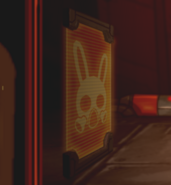 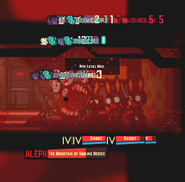