"I told you, I won’t give them away."
- Possessed employee

The Red Shoes (O-04-08) are a pair of shiny red high-heels. They sit upon a lilac pillow atop a white podium. The shoes seem to have abnormal gloss despite their age. It is implied that the shoes have teeth hidden in their confines which bite into skin with extraordinary strength when put on a foot, using so much force that the shoes are irremovable through physical means alone.

Temperance Level 2 or lower. At the end of the work, the employee will be possessed by the shoes, changing their appearance and replacing their weapon with a red axe,

HP to the maximum, and increasing their own

Max HP by 450% (minimum of 45, maximum ~1000). Afterwards, the employee will leave the containment room. Since Red Shoes 'leaves' the containment unit and employees can no longer work with it, this is considered breaching.

The Possessed Agent roams the facility, attacking nearby employees and Abnormalities, dealing average

Red Damage. The Abnormality uses the Defenses of the current armor that the possessed employee is wearing. When killing another employee, the possessed Agent will continue attacking the corpse 3 more times and

heal itself by 4% of its

Max HP with each hit. Unlike other minions, the possessed Agent will not activate the reduction of

SP regeneration of main rooms and will still

White Damage dealt to the enchanted Agent will subtract

Black Damage will still deal damage to the

SP of the possessed Agent. On depletion, it will

heal back to half of their gauge. The possessed employee is still affected by other status effects, like Portrait of Another World and/or The Child of Galaxy's effects.

When finishing a work with a

Qliphoth Counter might be reduced by 1 and once depleted, it will enchant a random

Temperance Level 2 or lower employee, prioritizing an employee of the same department, and attract them to its containment room - forcing them to wear the shoes once inside. If there are no agents available, it will possess a clerk instead. The possession is visible by a pink cloud around the head of the enchanted employee. A pink message warning will appear on the containment unit of Red Shoes when this occurs.

movement. The player should continue to click on the lured employee until the possession effect is gone or the employee will recover their

Movement Speed and continue to the containment chamber.

The shoes are implied and suggested to be the same shoes from The Red Shoes.

Red Shoes responds to the four works in order of best to worst:

Distressed, completing 8-11 will cause it to feel

E-Boxes (16), emotional state and their

Qliphoth Counter (1). Even when is not classified as an Abnormality which can escape by itself but indirectly, the defense that it uses are the ones of the possessed employee instead.

When an employee is killed by the abnormality[] 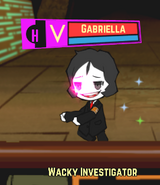 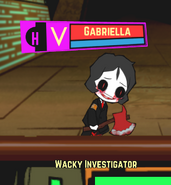 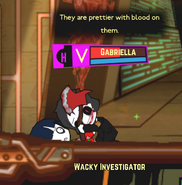