Rudol-ta is Coming to Town

"He chose to become god himself, rather than suffer from the lack of one. Thus, Rudol-ta was born."
- Angela

Rudol-ta of Sled (F-02-49-H) is a three-piece Abnormality; Rudolph, Santa, and the Sleigh.

Rudolph is a hornless reindeer with a long neck, black hooves, bulbous ears, and silver shackles chaining its legs together. Its body is made of red, white, and green materials sloppily stitched together, and it wears two collars of Christmas lights with red, green, and yellow bulbs. Rudolph has bloodshot, bulging eyes crudely stitched onto its face, a white beard, a round nose, and lipless teeth. According to encyclopedia entries, it also has a hole in its stomach.

Santa is a red statue on Rudolph's back inside a transparent bag of blood and human organs that are said to still be functional. It wears a Christmas hat made of intestines.

The sleigh is connected to the Christmas lights around Rudolph's neck. It's brown and held together by more stitchwork. It has two white runners, and two green hands mounted on the front of the sleigh. The sleigh carries a black bag tied with a yellow ribbon, which moves in its in-game sprite.

Its special ability is "Rudol-ta is Coming to Town". After escaping, Rudol-ta of Sled will start to wander the facility, leaving a trail of snow as it moves. Any employee who encounters Rudol-ta will receive constant psychological damage as long as they are in the same room as Rudol-ta. Slowly, its black bag will turn red, and once it's ready, it will drop a black present that will cling to an employee, giving them an unique trait: Rudol-Ta's Gift. The bag will turn back to black afterwards.

The details of origin are currently unknown, but it could be assumed that it was created, as mentioned in the Last Observation dialogue, from the desire of the kid who wanted to see 'Santa' dismembered, and probably making Rudol-Ta from its remains, a creature which gives gift equally to everyone, without discrimination.

Rudol-ta of Sled responds best to consensus. It likes cleanliness and amusement work, and hates violence and nutrition. Like all Abnormalities, its energy output changes depending on its mood.

Rudol-ta, with employees in panic for its arrival 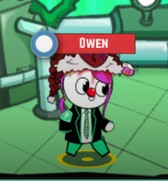 Rudol-ta's Gift, on top of its now-permanent Owen-er
Add a photo to this gallery
Retrieved from "https://lobotomycorp.fandom.com/wiki/Rudol-ta_of_Sled_(Legacy)?oldid=16898"
Community content is available under CC-BY-SA unless otherwise noted.