HE
This Abnormality is Capable of Breach

"The city still remained a beautiful place where the emerald roads sparkled bright as ever."
- Scarecrow Searching for Wisdom's Entry

Scarecrow Searching for Wisdom (F-01-87) is a scarecrow that is held up by what seems to be a pole, wearing a red shirt with white stripes with an exposed torso, an orange bowtie with white circles and a red leave on its neck, and blue overalls with the belts not attached. It also wears a hat that fully covers its head and has hands that are a metal rake and a scythe. It has blood stains on the tools and some parts of its clothes.

Its special ability is activated when its

Qliphoth Counter reaches 0. It can decrease by 1 when a

When the counter reaches 0, it will breach, taking the hat off, showing its head with empty black eyes and a stitched smile, with the upper half missing, and revealing that the pole was actually legs. The Abnormality possesses balanced

HP, chasing the last employee who it saw through the facility. It will use melee attacks that deal decent (3~7)

Black Damage with normal Attack Speed. If it lands the last hit against an employee, which will kill them, a 'straw' will appear from the scarecrow's mouth and will implant it on the head of the killed employee, covering it with a layer of tissue and sucking out the brain of the employee through the holes on its face, recovering 13 points of

health 7 times. This lasts for several seconds before it proceeds with its usual behavior. It will remain breaching until suppressed or the day ends.

The Scarecrow takes the role of the Scarecrow in the story of The Wizard of Oz, along with the other characters: Dorothy, the Tin Man and the Cowardly Lion. Due to them being incomplete, they embarked on a journey together to find the wizard and make their wishes true.

When they found the wizard, a few of the characters received what they wanted, to some degree of satisfaction. It is unknown what the scarecrow received in this version of the story, but it seems like it still didn't satisfy it, as it still continues to search for the minds of other 'intelligent' people.

The story told in its entries are probably about the Emerald City, where a treatment of body replacement was in question, even when it 'revived' the city. It could allow it to change and fix or replace failing body parts. But a rumor spread that the replacements of the body parts were taken from the poor for the rich. To debunk the rumor, a group of sick people were selected to take the treatment, but after many days, just one of them came out, with a scar on their head and saying they felt 'lighter.' He was a man that used to cry a lot and they considered that procedure a success.

But even after the events, the man was showing odd behavior. He just smiled when asked about the other people who were chosen, he didn't show remorse at the funeral of his father and enjoyed talking to himself and staring at the window, which led to his suicide. The people believed that the treatment caused his problems but soon they forgot about the events.

It is unknown if the man is directly connected to the abnormality, or if he became the Abnormality after his death, but it is likely that due to the 'mental issues' the man had, he had a part of his brain removed in the treatment (a lobotomy, if you will).

At some point, the Scarecrow ended up captured by the Corporation, alongside the Tin Man.

The Scarecrow Searching for Wisdom responds to the four works in order of best to worst:

Scarecrow Searching for Wisdom's emotional state is divided into 3 sections:

Qliphoth Counter (1). This includes its defenses when breaching: 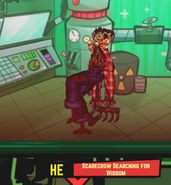 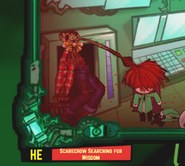 The Abnormality sucking the brain of an employee 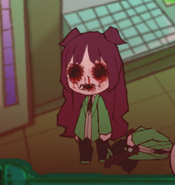 A dead employee after their brain got sucked out 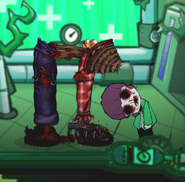 Defeated, along with a dead employee