"I am coming to you. You, who will be reduced to ash like me."
- Scorched Girl

The Scorched Girl (F-01-02) is an Abnormality in the form of a charred figure resembling a young girl. She has white eyes, a white open mouth, two thin legs, scorched ponytails, and the burnt tip of a lit match penetrating her torso.

Qliphoth Counter reaches 0. Her counter can decrease by 1 in the next ways:

Once her ability activates, she will breach containment, sobbing on the way, and a random employee (Agent or Clerk), prioritizing those within the same department, will be targeted by Scorched Girl, indicated by a match above said employee. She possesses very low

Movement Speed, and she will try to reach for the employee by walking through the rooms between them. Once she reaches the same room as the marked employee, after 5 seconds, she will explode, dealing a large amount of

Red Damage (300) to all entities in the room. Afterward, she will reappear in her Containment Unit and her

Qliphoth Counter will be reset.

She will not target employees that are working on abnormalities. If the marked employee dies or begins work on an Abnormality before she's able to reach them, the mark will move onto another available employee. If she can not target any employee within the facility, she will explode in a department's main room.

Scorched Girl was once a girl who sold matches. She had a somewhat miserable life, but in the lit matches, she saw visions of a better one in the warmth provided by them. It is most likely that in her obsession of longing for a better life, she accidentally started a fire and was burned to death. The Abnormality in itself is her soul, and it lives on with a match infused with it as a representation of her longing to be a part of the better life she saw.

Scorched Girl responds to the four works in order of best to worst:

Good. Completing 0-4 E Boxes will cause it to feel

Distressed, completing 5-7 will cause it to feel

Happy. Its usual waiting time after a task is around 15 seconds. Her

Qliphoth counter (2). This includes her defenses when breaching: 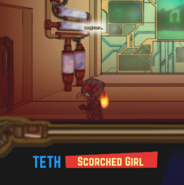