Edit
watch 01:54
Arcane: League of Legends - The Loop
Do you like this video?
Play Sound

"But nothing could compare to the music it makes when it eats a human."
- Singing Machine

The Singing Machine (O-05-30) is a large rectangular industrial meat grinder held up by 4 small legs. On the front, there is a black circular joint which divides the lid from the bottom. The lid has a small pipe where the music comes out. The interior is lined with what appears to be sawblades that grind any object that is thrown inside.

Its special ability is triggered when an employee tries to interact with it with the following methods:

Qliphoth Counter will be reduced by obtaining a

When a work is finished or the employee enters when its

Qliphoth Counter is at 0, the employee in the containment will be possessed by the machine and will jump into it, being grinded to death and turned into music. If the

Qliphoth Counter was at 0 at the start of the work, it will return back to 1. Afterward, a random employee in the facility, priority to the same department and to clerks over agents, will be 'Bewitched'.

A 'Bewitched' employee will start to attack other employees, focusing on a single target, trying to kill them with a great hit of 16 (base)

Red Damage at slow Attack Speed. If the 'Bewitched' is an agent, they will deal 3 more damage proportional to their

). If they land enough damage on the target employee, the target will be killed. Then, the bewitched employee will put them into a bag and drag them to the containment unit of the Singing Machine. The employee will then throw the victim into the machine, repeating the process and bewitching another random employee. This continues until all the possessed employees are suppressed.

Singing Machine responds to the four works in order of best to worst:

Happy. Its usual waiting time after a task is around 10 seconds and

Qliphoth Counter (1). Even when it doesn't possess defenses by itself, the bewitched employees will take defenses of the current suit that they were wearing.

Listening to the song[]

Possessed by the Singing Machine[]

Being attacked by the possessed employee[]

An employee about to enter into the Singing Machine 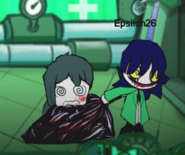 The employee waiting the end of the task