"The day a ripe apple fell off the tree in the garden where the princess and the king stood, the witch's heart shattered."
- Snow White's Apple

Snow White's Apple (F-04-42) is a humanoid Abnormality with an apple for a head. She is incredibly tall, with a neck and arms that appear to be made of thorned flower stalks. She wears a long red dress with white puffed sleeves, a white waist apron, and what appears to be a large dress collar of wilted leaves. Her head has hollow eye sockets and nasal apertures that were said to have been eaten by worms and birds.

Her special ability will trigger once her

Qliphoth counter reaches 0. It can potentially be decreased if the result work is

Once the condition is met, she will teleport out from her room and appear in a random hallway or small room of the current department, and sprout vines from the floor. She has high

HP at 800. Employees who walk on the vines will have reduced

Black Damage every 4 seconds, as long she is in the same room. Once the room's floor is covered by vines for the first time or an amount of time pass, Snow White's Apple will disappear from the current room and appear in another area of the facility, repeating the same actions until she is subdued. The vines will be removed in the next day.

Snow White's Apple is the apple from "Snow White and the Seven Dwarves". Created by the witch's rage and curse, it was thrown away after a single bite from Snow White, the apple had poisoned her. The apple became lonely, and developed a deep hatred for her. It waited and waited to rot, but never decomposed. As time passed, birds and worms took bites out of it, leaving holes in the apple. All died soon afterwards due to its poison, and their corpses began piling around it. The apple constantly thought about its own existence. After a long time, a dried, dead stem sprouted. Lifeless leaves grew around it, and continued to grow each day. One afternoon, the apple was finally able to move. It thought about Snow White who was sleeping for a long time, and the prince who came to wake her up. The princess which was no longer an apple began to search for her prince.

In the last observation (See Legacy Version), Snow White's Apple realizes that her 'prince' doesn't exist. She simultaneously realizes that she will never stop existing, and that there is no point in waiting around for nothing.

How Snow White's Apple arrived in the facility or where she was found is still unknown.

Snow White's Apple responds to the four works in order of best to worst:

Good. Completing 0-8 E Boxes will cause her to feel

Distressed, completing 9-13 will cause her to feel

Happy. Her usual waiting time after a task is around 15 seconds. Her

Information if the Abnormality can escape or not, plus its Qliphoth Counter (1). This includes her defenses when breaching:

"...When the prince kissed the princess, she coughed up the bits of an apple stuck in her throat. The dwarfs cried out in happiness. Snow White and the prince walked through a flower-covered path and headed to their kingdom. Everyone lived happily ever after."

"Then there was the apple created from the witch's wrath and curse. It was also a part of herself. The apple that dropped from Snow White's hand after a single bite could never be happy. The apple, full of loneliness and hatred toward the princess, waited for the day it would rot away and return to the earth."

"Was it the enchantment, or was it the wrath which was bending the laws of nature? Even after enough time had passed for it to rot and allow its seed to bear fruit, the apple did not rot. In the meantime, one half of it was kicked and crushed by someone's foot, the other half was filled with holes, eaten away by the likes of birds and bugs."

"The carcasses of birds and bugs piled up near the apple. The apple pondered about its existence in the midst of the corpses rotting around it. One day, a branch grew from it. The leaves and branches were already withered and dry, but it continued to grow."

"Finally, one afternoon the apple gained the ability to move on its own. It thought of the princess and the prince who left happily. Snow White had also been sleeping for a long time, but a prince came and woke her up. The apple, now a princess in its own right, no longer needed a prince; she began to embark on a journey.
- Excerpt from ‘The Hidden Stories in Fairy Tales No One Knew’ (Author unknown)" 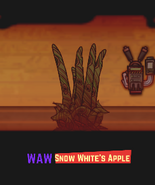 Entering into a new room 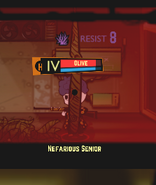