"An Abnormality in the shape of a training dummy used to train up-and-coming managers."
- Standard Training-Dummy Rabbit's Entry

Standard Training-Dummy Rabbit (0-00-00) is an Abnormality resembling a training dummy. It has a primarily white round body with a head that features markings resembling eyes and a mouth, yellow cheeks, and protrusions that resemble ears.

This Abnormality is used exclusively in the Tutorial section of the game.

Qliphoth Counter reaches 0. It will decrease by 1 when

Repression is used on it.

When the counter is depleted, the Abnormality will breach but will remain immobile outside the containment's door. It possesses low

HP at 100 and doesn't have any other special abilities. It is easy to suppress and will flip upside down when defeated.

Due to this Abnormality being docile and harmless, it has been used as a training dummy for up and coming managers. Despite being called 'Dummy Rabbit', it doesn't like carrots. It likes to follow people and it also believes itself to be an employee of the facility.

Not much else is known about how it originated, or if it was artificially made or not.

Standard Training-Dummy Rabbit responds to the four works in order of best to worst:

Qliphoth Counter (1). Its defenses are:

"An Abnormality in the shape of a training dummy used to train up-and-coming managers."

"Rumor has it this Abnormality was chosen to be used for training as it is the most docile and tame of any that we have extracted. It’s called a training dummy “rabbit”, but it doesn’t seem to enjoy carrots. It likes people.
If it escapes, it is merely following the employee as they leave its Containment Unit." 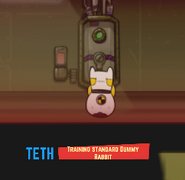 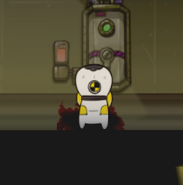