"Don't look away, just keep your eyes on it. Contain it in your sight."
- The Burrowing Heaven's Entry

The Burrowing Heaven (O-04-72) is an Abnormality similar in form to a tree, having a stalk coming from the floor and two limbs/wings-like extremities that branch into minor parts. Its main body is of red color. In the junction where the three main parts meet, it has a yellow eye with a red iris, as well as smaller eyes on other parts of its body.

Qliphoth Counter is reduced by 1 every 10 seconds when it is off screen while working with it. This only includes the Abnormality, not the containment. Besides reducing the

Qliphoth Counter, it will also force the

Success Rate to be 0%, making the work only produce NE-boxes. Its

Qliphoth Counter can be increased by 1 when getting a

Normal result or by 2 when getting a

Qliphoth Counter is depleted, The Burrowing Heaven will breach with its 'wings' extended and 800

HP. If there is an employee in the containment room, the abnormality will instantly kill them. The Abnormality doesn't attack when it is on camera and only moves when 3 seconds pass out of camera. If it isn't on camera, it will teleport to a random room with employees in them (Priority to Agents). If the room that it left had employees or other entities, it will inflict a heavy amount of

Black Damage (150) to all the targets in there. If it kills employees, it will leave their 'fruits' after screams; similar entities of itself will hold different parts of the dead employee on their branches. These entities aren't dangerous. It will usually teleport into the middle of the main rooms and near the sides of the other rooms, like hallways.

It will remain breaching until suppressed or the day ends.

The Burrowing Heaven responds to the four works in order of best to worst:

The Burrowing Heaven's emotional state is divided into 3 sections:

Good. Completing 0-12 E Boxes will cause it to feel

Distressed, completing 13-20 will cause it to feel

E-Boxes (24), emotional states and their

Qliphoth Counter (3). This includes its defenses when breaching: 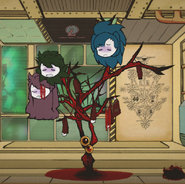 Its 'Fruits', after killing employees