"Tell the kid today's treat is going to be grape-flavored candy. It's his favorite."
- The Dreaming Current's Entry

The Dreaming Current (T-02-71) is an animal Abnormality with the form of a cobalt blue shark with legs. The shark possesses two wide mouths with many rows of teeth and rainbow colored tongues sticking out of them, and a single black eye with a black liquid dripping from it can be seen. There's a syringe embedded in a side of its body surrounded by a bloody mark or wound, and there are multiple injection holes on its lower body. In containment, it constantly make gurgling sounds, similar to water flowing.

Qliphoth Counter will decrease by 1 when:

After the counter reaches 0, The Dreaming Current will breach. It possesses 200

HP. It will start by selecting a random hallways in the facility, usually 1 per department/team, to be covered by a rainbow liquid, the liquid is supposed to damage

At the start, The Dreaming Current will stand at the end of one the hallway, in one of the sides; preparing itself, making splashing sounds for some moments. Afterwards, it will charge at a drastic

speed to the opposite side with its jaw open, leaving a trail of rainbow bubbles and dealing massive (150)

Red Damage to anything in its path. When reaching the other side of the hallway, the Abnormality will teleport to other affected hallway and continue the charge, repeating until it has passed almost all of them and stopping in the end of the last room, standing idle for a while before preparing itself to charge again to the opposite side, back again through the same hallways. The Dreaming Current goes through an order of hallways and it will stop charging just in 2 locations which are 2 selected hallways.

The only open chances to suppress the Abnormality are when it's idle or preparing to charge.

There was a child who had a severe infection, and it was estimated that he wouldn't live past two years of age. The parents of the child abandoned him, and a couple of researchers became his father and mother, adopting the child for an 'experiment' and bringing him to a laboratory.

The researches have managed to prolong the child's lifespan. He learned to coo and walk in the laboratory, though he was never able to properly speak or read. The kid liked the ocean, but instead of taking him to see it, the researchers gave him grape flavored candies which would allow him 'see' the ocean from the safety of the lab.

The child spent his life within that laboratory, listening and obeying the researchers and enjoying the candies they'd give him. He would never get to run around in a nice grass field under the warm sun, but his shaky steps continued to be filled with enthusiasm. His only concern was about what kind of candy he'd eat tomorrow.

The Abnormality itself seems to either be the child himself or a manifestation of the child's experiences and love for the ocean.

The Dreaming Current responds to the four works in order of best to worst:

The Dreaming Current's emotional state is divided into 3 sections:

Good. Completing 0-5 E Boxes will cause it to feel

Distressed, completing 6-10 will cause it to feel

E-Boxes (20), emotional states and its

" “Just... Just keep showing him the book. Oh, and it has to be a page with pictures, since he probably can't read. When the experiment seems to drag on, try to draw his attention, like mimicking sounds. I don't need to explain every detail, right?

Yes, I know. It's unfortunate. Pitiful and sad. I do feel human emotions, thank you very much. However, he ultimately survived thanks to this place. I hope he continues to live, in any shape or form. If you're thinking the same thing, it'd be better off if you dropped that guilt right now.
....
Tell the kid today's treat is going to be grape-flavored candy. It's his favorite.” "

<Excerpt from an Encyclopedia>

"Contrary to popular belief, most sharks are small in size. There are only a handful of species that cause harm to humans... After all is said and done, the biggest appeal of sharks is their strong jaws and teeth. A shark's jaw can apply an intense amount of force, around 20 times that of an adult human. Besides, their vision and olfactory sense are extremely well developed, allowing them to locate their targets easily. This is why sharks could reign as the ocean's greatest predator until today."

"The parents had long deserted the child. They said the old infection would kill the child before two years passed. The researchers were the child's new parents. He learned to coo and walk. Although unable to talk properly, the child liked the ocean. Instead of visiting the ocean, the child was given candy which let him see the ocean. Many colorful nights and days passed."

"The child, who was thought to die within 2 years, managed to live for a long time. As always, he liked sweet candy, followed them, and loved the place as his home. Though the only thing the child could do was run around inside a cramped lab instead of a grass field under the sun, his steps were shaky but filled with enthusiasm. Excited about what kind of candy he would eat tomorrow." 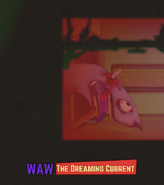 The Dreaming Current preparing to charge

The Dreaming Current attacking with its charge

A hallway covered by the rainbow liquid 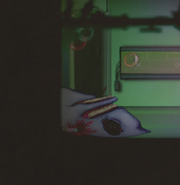 Concept artwork for The Dreaming Current
Community content is available under CC-BY-SA unless otherwise noted.
Advertisement