"Those who succeed in the hunt are granted with one of the very feathers that countless hunters once yearned for."
- The Firebird's entry

The Firebird (O-02-101) is a bird Abnormality, initially looking like a black feathered bird of long tail, neck and beak, with glowing yellow eyes and with a mark on its chest. It rest on a branch of a brown tree without leaves, with darker marks where it rest.

Its ability triggers upon

Qliphoth Counter is depleted. It can fluctuate by the next methods:

Qliphoth Counter becomes lower, a screen filter is added to its containment that resembles flames, increasing the

Damage taken by the employees when failing a work . The lower the

Qliphoth Counter is, the higher the extra damage is inflicted (

When an employee finish a work with its

Max HP, or when finishing with its

Qliphoth Counter at 1, The Firebird will transform for a short moment into a flaming bird,

healing the employee to

SP every 5 seconds for 60 seconds.

Qliphoth Counter is depleted, it will breach. It possess 1500

Movement Speed. When breaching, in the room where it is located will get a special filter and all the other entities in the same room will start to receive minor

Red Damage (5) every second. If the Abnormality is attacked, it will prepare for a moment and charge against the attacker, dealing great(90-110)

White Damage to anyone in its path, until reaching the end of the room. Employees who attack it will also get Blinded, with their

Work Speed halved, until completing a work (However, employees wearing Judgement Bird's E.G.O. Gift will not suffer this debuff). Employees who die by The Firebird's attacks will get burned, along with their eyes and chest showing orange glowing marks that will vanish after they fall dead.

After 45~90 seconds, The Firebird will return to its containment by its own. Employees will be unable to attack it when is returning and the Abnormality will no longer attack employees, however, the room damage will remain until back in containment, resetting the

The Firebird used to live in a forest, far away of most people. Many hunters wanted its feathers, for pride or honor, or by different other rewards that such feathers could bring, they searched for the bird in the forest. With the rumors spreading, adventurers and travelers started to come to the forest where the bird lived, soon with the silent forest becoming crowded.

But after some time, the people became bored of the rumors and left their hunt for the bird, with it just becoming a legend, and after a severe pain, the flaming bird became blind.

After a long time, the bird found a new forest, where people lived in. Soon, the bird wanted to initiate the 'hunt' once again on the new forest, with the ones who succeed in the task, getting a feather of the flaming bird.

How the Abnormality arrived into the facility is unknown.

The Firebird responds to the four works in order of best to worst:

The Firebird's emotional state is divided into 3 sections:

Distressed, completing 11-17 will cause it to feel

E-Boxes (24), emotional states and its

Qliphoth Counter (3). Its defenses when breaching are:

Unlocks the E.G.O. Suit and Gift 'Feather of Honor'.

The Abnormality's E.G.O. Weapon 'Feather of Honor' can only be unlocked and added by defeating it when breaching, once per day. It cannot be manufactured from the Abnormality's Details Tab.

The Firebird applying its healing on the employee 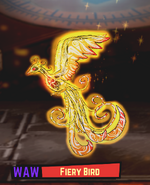 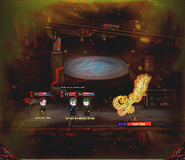 Fire Filter on the room 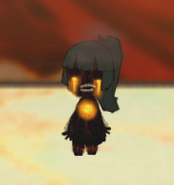 An employee killed by The Firebird 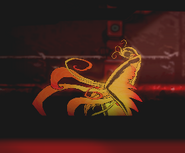 The Weapon (Feather of Honor) in use.
Community content is available under CC-BY-SA unless otherwise noted.
Advertisement