The King of Greed (Legacy)

The King of Greed (Legacy)

In the Name of Love and Greed

"Everyone has thirst for happiness. We can't just blame the fish who swallowed the gem for everything. We think that the river in our mind is peaceful and we are in control of it. But the truth is, we are not. How do I know this? Because I've been through that before."
- Angela

The King of Greed (O-01-64-W), also known as one of the Magical Girls, is a humanoid Abnormality taking the form of a girl with dark skin and long white hair, wearing a yellow dress and accessories, notably a necklace and bracelets. She is encapsulated in a golden, egg-like being, with a mouth at the top and a transparent part on the front, making the girl inside it visible. It makes glittering sounds when it is in its containment room.

Its special ability is "In the Name of Love and Greed", which triggers after remaining in a bad mood for too long. The Abnormality will transform into a creature, similar to a fish with a big body, with a huge mouth at the front, small legs/feet and eyes, with long black appendages coming from the sides, and conserving the color from the previous form. From the big mouth is hanging the head of the girl. The Abnormality makes crunching sounds, along with the laugh of a girl, in this form. Afterwards, it will escape from the containment unit.

When breaching, The King of Greed moves in only one direction, and when reaching the end of the hallway or another door, it will teleport to another random hallway in the facility, appearing from one of the sides.

Any employee or Abnormality which is trapped or touched by the Abnormality's mouth will suffer a huge amount of Physical Damage, killing anything in its path almost instantly. It doesn't deal any damage from behind.

The King of Greed seems to be linked to The Queen of Hatred, due to both being named 'Magical Girls' before and mentioned to be sisters along with the others Magical Girls, in the Final Observation Dialogue. She was one of the 'heroes' who wanted to protect the world, but due to their own desires, she met her demise. The King of Greed was sealed in an golden egg-like being which is similar to a fish when transformed, which in her entries, the 'origin' of that form is because of a hungry fish who lures at the bottom of the mind's river who acts like a symbol of greed and desire; and she encapsulated herself by her own will.

How she arrived to the facility or where she was found are still unknown.

The King of Greed likes nutrition and amusement, dislikes consensus and cleanliness, and hates violence work. 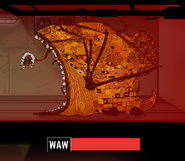 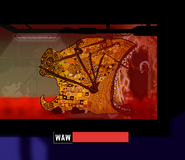 About to teleport
Community content is available under CC-BY-SA unless otherwise noted.
Advertisement