The Knight of Despair

The Knight of Despair

"All that remains is the hollow pride of a weathered knight."
-The Knight of Despair's Entry

The Knight of Despair (O-01-73), also known as one of the Magical Girls, is a humanoid Abnormality with the appearance of a pale skinned girl with blue hair that gets darker and turns to black at the ends. Her head is topped with a tiara that has three, spade shaped endings. Half of her head is black with sharp horn segments protruding out of it. The other half being her pale skin tone with a black tear on her cheek.

The upper part of her arms shows her normal skin, while her forearm is covered by the black coloring. Her dress starts at her chest with a grey coloring and black spade on her breast. As it moves down, it turns to blue - and then to black at the end. There is a noticeable galaxy-like pattern in her hair and dress. A white translucent cloak comes off of her back.

Good work result. If this happens, she will create a blue veil around the employee before they leave the room, blessing the agent and giving them a special state.

The special state is marked with an icon above the affected employee. The blessing halves all

Pale Damage and prevents the employee from performing any other work besides Suppression. The blessing remains until the end of the day and only one blessing is given at the same time.

If the blessed employee dies or panics, the state will be removed, the Abnormality will breach and her appearance will change - revealing black rapiers floating beside her, an eye open, and multiple spikes coming out from her body.

She possesses a average amount of

Movement Speed. Like the other Magical Girls, The Knight of Despair possesses teleporting abilities to reach any room in the facility between some intervals. Once facing an employee, she will throw a homing rapier toward them, dealing

slowing them for a pair of seconds, and impaling them in the case they die. Her attacks take intervals to occur as she must stop to perform them. Her cry can be used to locate her.

She will continue breaching until the day ends or if she's suppressed. Once defeated, her rapiers will raise around her and impale her as spade particle effects come out in the impact.

In the past, she was once a knight who protected a kingdom and its people. After a conflict in the state, evil started to grow stronger. When the knight realized that she could not uphold peace any longer, she disappeared, becoming a knight with an obsession to protect. Alongside her sisters, one who fought for peace but succumbed to her own greed, and another who fought for justice - but ended up becoming a villain after realizing there was no evil left to fight - they were consumed by their own aspirations. Soon, they vanished.

The knight tried to redeemed herself by saving others, not totally under the corruption of evil, but forgotten by the ones she used to protect.

The Knight of Despair responds to the four works in order of best to worst:

The Knight of Despair's emotional state is divided into 3 sections:

Happy. Its usual waiting time after a task is around 15 seconds.

E-Boxes (24) and their emotional state.

Information if the Abnormality can escape or not. This includes her defenses when breaching:

Unlocks the E.G.O. Gift 'The Sword Sharpened with Tears'.

Unlocks the E.G.O. Weapon and Suit 'The Sword Sharpened with Tears'.

"An Abnormality of despair that has gone through a repeated cycle of faith and betrayal, leaving only the emotion that is expressed through black tears."

"A hero of the past who used to be a guardian of justice. She dedicated her entire life to protect the king, the state, the city, and the weak. The knight had to uphold the laws of God and the pursuit of valor, chivalry, and justice. However, after a long history fraught with hardship and conflict, the knight realized in retrospect that nothing was truly upheld on her watch. The truth changed a lot of people.
One who fought for good became evil upon realizing that there was no evil left in the world. One who dreamed of a world where everyone could be happy was tinged with greed and started to devour everything. Like them, so many things once thought to be forever constant faced changes and perished"

"Who said a knight never cries? Have you ever seen tears brought out by despair, not sadness? The endless stream of grief has long turned the eye sockets into hollow husks. Inside, black diamonds sometimes fall down like ashes.
The will to protect seems to remain unchanged after all this time; even in containment, it is still obsessed with the act of protection. All that remains is the hollow pride of a weathered knight. The tenacity of the hero who cannot leave the past behind is a pitiful sight."

"When Justice turns its back once more, several dozen blades will rove without a purpose. In shame of failing to defend once again, and in rage against the world, the swords will eventually point at those she could not protect."

"The knight who wanted to redeem herself by saving others was now dishonorably called the Knight of Despair; forgotten from the people's memory, just like the others."

The Knight of Despair Applying its Blessing Effect 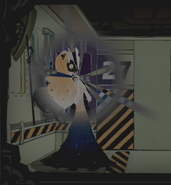 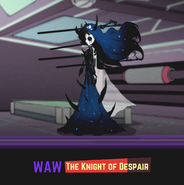 Throwing her sword across the room

The Knight of Despair breaching and attacking an Employee 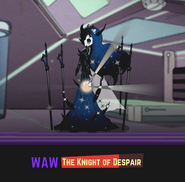 The Knight of Despair teleporting 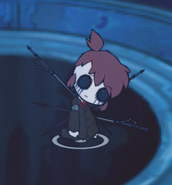 An employee killed by The Knight of Despair 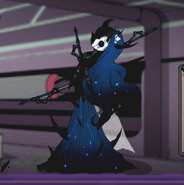 The Knight of Despair Details unlocked
Community content is available under CC-BY-SA unless otherwise noted.
Advertisement